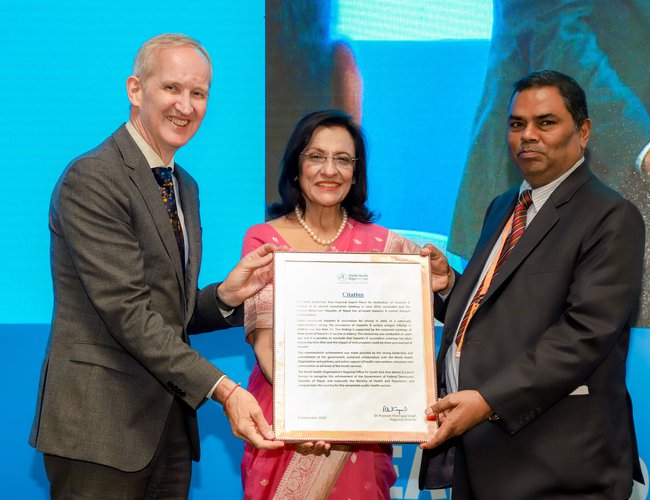 Ministers of Health of six Member countries of WHO South-East Asia Region were today felicitated for public health achievements in recent months such as measles elimination, hepatitis B control, and elimination of mother-to-child transmission of HIV and Syphilis.

Sri Lanka was recognized for eliminating measles; Bangladesh, Bhutan, Nepal and Thailand for becoming the first four countries from the Region to control Hepatitis B; and Maldives for eliminating mother-to-child transmission of HIV and Syphilis.

Presenting citations to the Ministers for their public health achievements at a side event during the Seventy Second Session of WHO Regional Committee of South-East Asia in New Delhi, the Regional Director, Dr Poonam Khetrapal Singh, and said, “disease eliminations have always been high on our agenda. When I talk about sustain, accelerate and innovate, ‘accelerate’ is to step up efforts to eliminate diseases like the neglected tropical diseases.”

The Minister of Health, Nutrition and Indigenous Medicine, Sri Lanka, Dr RajithaSenaratne, was presented the citation for measles elimination. Sri Lanka is the fifth country in the Region to eliminate measles, a flagship priority program of WHO in South-East Asia since 2014.

The Minister of Health of Maldives, Abdulla Ameen, was presented a citation for eliminating mother-to-child transmission of HIV and Syphilis. Maldives is only the second country in the Region to have achieved this feat after Thailand.

This is the fourth consecutive year that the public health achievements awards were presented to Member countries on the sidelines of the Regional Committee Session. With focused and concerted efforts, Member countries are making substantial progress around the priority health issues.

How A Changing Virus Is Reshaping Scientists’ Views On COVID-19 By REUTERS 19 hours, 38 minutes ago