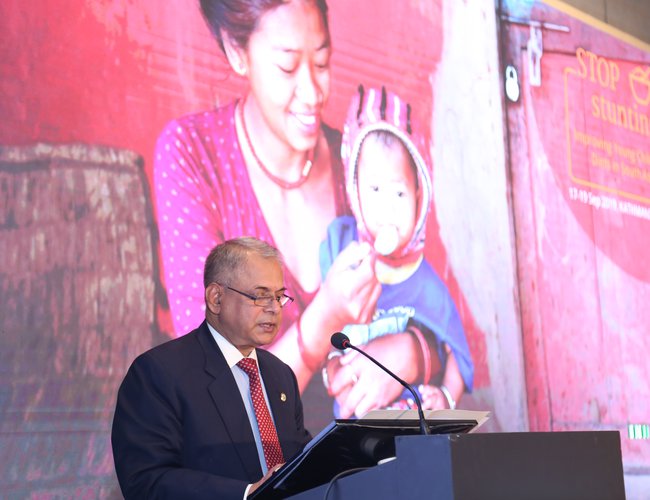 Amjad Hussain B. Sial the Secretary General of South Asian Association for Regional Cooperation (SAARC) said that South Asia was home to the largest population of children, of which 59 million are stunted children, under the age of five.

Addressing the Inaugural Session of the Regional Conference, “STOP STUNTING: Improving Young Children’s Diets in South Asia” in Kathmandu this morning, Secretary General of SAAR said that stunting had a huge impact on children, not just physically but on their mental or cognitive development, which in turn had an impact on the development of a nation, both from social and economic standpoints.

“It is, therefore, time that we look at children’s development from a broader perspective,” he said.

The Secretary General said that complementary feeding, coupled with poor dietary practices, hadan adverse impact on the nutritional status of children. He also said that poverty situation and lack of awareness about such issues were equally detrimental to the development of children. “Our policies and programs, therefore, need to cater to varying stages of development across the region,” he asserted.

Stating that since its inception, SAARC had been according high priority to the promotion of the welfare of children, the Secretary General highlighted several initiatives taken by SAARC to achieve this end.

In this context, he made a particular reference to the SAARC Social Charter, which identified several targets to be achieved in respect of the children. He said, “In addition to having observed the SAARC Decade of the Rights of the Child, we have instituted two major Regional Conventions related to children, namely Convention on Combating Trafficking in Women and Children for Prostitution, and Convention on Regional Arrangements for the Promotion of Child Welfare.” He also referred to the Regional Action Framework on Nutrition developed jointly by SAARC and UNICEF.

The Regional Conference being held in Kathmandu on 17-19 September 2019 is the third in the seriesco-organized by SAARC and UNICEF in the implementation of the Regional Action Framework on Nutrition.

SAARC actively collaborates with UNICEF in the promotion of the welfare of children in pursuance of the Cooperation Agreement first signed between the two organizations in 1993.