Localizing climate actions is obligatory from two perspectives; 1) the PA will not achieve its objectives if its elements are not delivered at local level. 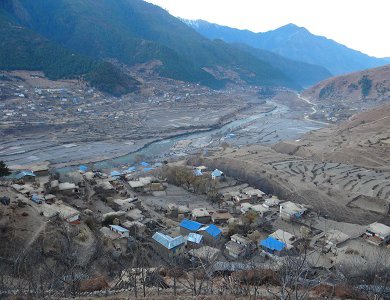 On the onset of 74th UN General Assembly, the Secretary General António Guterres convened Climate Action Summit in New York on 23 September 2019. The main purpose of the summit was to push climate actions to achieve the goals of Paris Agreement to avoid dangerous level of climate and building resilience for a sustainable future. The Secretary General said the summit was not a negotiating summit; it was a climate action summit. A recent UN report has indicated that the current global efforts which have been committed through Nationally Determined Contributions (NDCs) by parties are not sufficient.

At global level, Paris Agreement (PA) has been considered as an achievement in which parties have agreed to deliver climate actions. Key elements of PA are technology, finance, and capacity for mitigation and adaptation to be delivered for limiting global temperature rise well below 20C by end of this century and build the resilience of communities and ecosystems. By now some 165 parties have submitted their Nationally Determined Commitments (NDCs), including Nepal, to deliver PA at country level. NDC is an upward commitment that a party expresses to global community. An accountability or downward commitment is equally essential both by global community and national governments to the vulnerable communities.

Localizing climate actions needs all PA elements, technology, finance and capacity for mitigation and adaptation, must be delivered at local level. It needs favorable environments at local level. One of key prerequisites for localizing climate action is an effective and dedicated institution at local level. This institutional mechanism should be present within the organizational structure of local government. A unit or a section or a division dedicated to climate change staffed with trained human resources should be designated. Human resource within this unit should be able to support development sectors within the local government to integrate and mainstream climate change into the sectors. The staff should also be able to mobilize specific skill and knowledge for climate change adaptation and mitigation. Climate change is a cross cutting subject, so it is essential that it goes across all development sectors right at local level for local actions.

Climate actions at local needs technologies that are appropriate to local climate change context. Capacity of local communities should be strengthened to adopt the technologies. All traditional practices might not fit into the changing climate, but strategic practices could be worth continuing. A constant research and capacity development mechanism for appropriate technologies to meet the needs for a local climate change context should be established.

The other important element for localizing climate action is finance without which any activity for capacity building and technology cannot be delivered. At the global level there are climate change financing mechanisms within and outside UNFCCC process. However these financial resources have hardly reached to local level. In one hand it is difficult and time consuming to access such resources by national government because of tangling procedures; on the other hand any access by the country is mostly spent at national level, hardly reaching to local level. There is no such clear financial procedure yet to channelize the international climate finance from national level to local level. Such procedures should be developed and applied.

The other financing mechanism for climate action is by mobilizing internal revenue through regular budgeting system of the government by integrating and mainstreaming climate change in sectoral programs and area development plans. Mainstreaming is a sustainable mechanism for climate action and it needs a clear guideline to be followed up by the government. Nepal has 7 step local planning guidelines in which step 3 and 4 are vital for mainstreaming and integrating climate change. In order to ensure climate change integration and mainstreaming, the local government should assess local climate change situation and scenario, its present and anticipated effects and impacts on communities and environment, and identify adaptation and mitigation measures while going through step 3 and 4 in the planning process. This will help integrate adaptation and mitigation activities in local development that can be financed through budgetary system.

Nepal government has recently endorsed Climate Change Policy 2019 which replaces the 2011 Policy. The policy aims to mainstream climate change in development sectors, build capacity and awareness, and channelize climate finance for local actions. At the federal level it is a good document. But the success of the policy will lie on its localization. Unless stable institutions and supporting mechanisms to local government for technology and capacity building are established, and the financial mechanism to channelize to local level is clear, the objectives of the policy will be hardly materialized. There is confidence around “what” should be done, but the challenge remains around “how” the actions should be or can be delivered at local level.

Provincial and national level development projects should also integrate climate change. The integration should be mandatory while designing a project. It can also be ensured through Initial Environmental Examination (IEE) and Environmental Impact Assessment (EIA) of the projects. The projects should pay attention to climate scenario of the project area and it should adequately design measures to avoid potential impacts of future climate on outputs and outcomes of the project. The project should have a zero GHG emission or the least possible by adopting measures among all potential alternatives.

In the past Nepal has demonstrated as a pioneer for climate change action at local level. It has now once again the opportunity to demonstrate for an enhanced local action for Paris Agreement. Climate change and need for action are reality; it must be reflected in every development initiative. Climate action is not a matter of volunteerism; it has now become a mandatory subject. So the climate action should be enforced by developing appropriate climate change law at country and sub-country levels for enhanced actions at local level.

Japan And Nepal Can Both Contribute To World Peace And Prosperity By Masamichi Saigo 3 days, 18 hours ago

Hindurastra ? By Hemang Dixit 1 week ago

Why Upstream And Downstream Linkage In The River System Can’t Be Ignored? By Pratik Poudel 1 week ago

COVID-19: An Overstaying Visitor without Visa By Dr. Omkar Shrestha 1 week, 3 days ago