Climate Change From NAPA to NAP 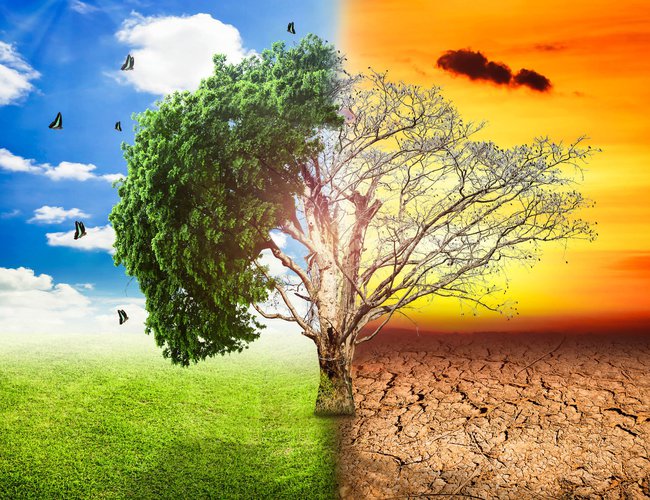 Climate change no longer needs defining and clarifying. Yet there are ambiguities among many of us regarding what it actually is. Many of us are not so convinced when we say an increase of 10C in global (or national) average temperature. We do not usually believe that it affects us because we have diurnal difference of more than 100C between minimum and maximum temperatures, and difference of over 300C between winter minimum and summer maximum.In extreme cases, we have several 0C differences. So we question ourselves as to why we are so used to panicking about just 10C temperature change in our atmosphere. But the difference that we have in our heads is the daily or seasonal variation or variations in events, and the climate change also looks at average of these variations. Naturally the average climate values and the average of the variations should not change significantly over the years, thus the annual average values or the average of the variations of temperature should remain the same over the years despite their diurnal and seasonal variations. In case of precipitation, the seasonal change, the change in form and characteristics of precipitation also matter.

We believe that when statistics tell us that there is a significant difference between two numbers, no matter what the difference is, it indicates that there are certain disturbances and such differences will also bring certain impacts around as a consequence.

Nepal’s climate data analysis carried out by Department of Hydrology and Meteorology (DHM) in 2017 indicates that even a change of 0.0560C per year in the maximum temperature over 43 years (1971 – 2014) is highly significant. So by this standard a change of 10C is highly significant, which will have high impacts on environment and living system. Nonetheless there is still global belief that if there is a 1.50C increase over 100 years of time, perhaps we can cope with it, but if it happens in a short period of time, the impacts of it could be beyond our capacity to cope.

The analysis of DHM is based on observed temperature data of 1971-2014. This shows over the last 43 years of time, with 0.0560C per year, there is already an increase of 2.410C in Nepal’s average maximum temperature. Unfortunately the report did not provide information on the average temperature, but the increasing trend of the minimum temperature over the same period is not significant, it is smaller than that of maximum, pulling down the mean average below 2.410C, which could be still within our coping capacity.

However, we have already observed the impacts of such temperature increase on the physical and social environments. The very obvious impact we have seen is receding of snow lines and declining of snow and glacier masses, increase in number and size of lakes formed from the snow and glacier melt water. A thumb rule of relationship between temperature and elevation in Nepal is that in each 1,000m increase in elevation, there is a drop of temperature by 50C. So a 10C average rise in temperature will recede the snow lines by around 200m vertically back with thinning in the depth of the snow and the glacier deposition. We have also observed increased number of intensive flood events, extended Monsoon season in recent years, and erratic rainfall events that affect agriculture, the main livelihood of two thirds of Nepal’s population. These events have affected the poorest the most who depend on natural environment for their livelihood and have poor coping capacity.

The UNFCCC (United Nations Framework Convention on Climate Change) brought the concept of NAPA (National Adaptation Programmes of Action) in 2001 specifically to support the Least Developed Countries (LDCs) to address their urgent and immediate needs to cope with impacts of climate change. With the support from the UNFCCC mechanisms and several other funding agencies, the LDCs, including Nepal, have prepared NAPA and are in the implementation process. NAPA is basically a response and coping approach based adaptation. Its actions are designed based on observed impacts of climate variabilities and changes. It enhances the autonomous adaptation process, which is more or less a natural process. So the NAPA focuses on restoring the damages or impacts already being brought about by climate change and find alternatives if they cannot be coped. For example, if there is a drought because of erratic rainfall or drying up of water sources, NAPA helps to find out alternative mechanisms to cope with the problem. Similarly, if there is damage due to flood, NAPA helps to build mechanisms to prevent from further damage of such floods, etc. So NAPA designs its action plans based on observed impacts of the events, it does not design its actions based on the anticipated impacts of climate change that is going to happen in to the coming future.

In view of continuous increase in global temperature and erratic events of climate variables which have been anticipated to occur for next several decades, action plans under NAPA are not sufficient.

Realising the inadequacy of NAPA to take action now to address the needs for the anticipated events of climate change in the future, which did not exist in the past several thousand years, the UNFCCC came with the concept of NAP (National Adaptation Plan) in Cancun in 2010 for a planned adaptation. But still many of us think they are the same or similar, and when we discuss NAP, the discussions do not get differentiated from NAPA. There is a need of understanding the objectives of NAP first, which is to act now for reducing potential adverse consequences of climate change in the coming future, which is completely different from NAPA that takes the actions primarily based on the observed or past events. In short, NAP is a forward looking action. NAP theoretically does not prepare plan to build irrigation canal to address the drought faced last year hoping the same will happen, this will be done by NAPA, but NAP asks to take actions now to address the impacts of anticipated drought in the coming years, which might not necessarily be similar to that which had occurred in the past.

In this context implementation of NAP needs more science based future climate information and its impacts in addition to observed information. NAPA has refereed that Nepal’s temperature might increase by 1.2 – 1.4 0C by 2030, 1.7 - 2.80C by 2050/2060 and 3.0 - 4.70C by 2090/2100 compared to pre-2000 baseline and based on different models. The development sectors (sustainable development goals) should be able to understand what will be the impacts of these increases in temperature on the respective sectors by 2030, 2060, etc. Based on knowledge and information they will be able to design and implement action plans now to avert and minimise the adverse impacts. However, there is an uncertainty on the magnitude of change in climate, which results in uncertainties in the impacts as well.This needs periodic assessment and use of best science to minimise the uncertainties- both climate change and its impacts that helps identifying and choosing the most appropriate measures now.

The core element of NAP is to integrate climate change into Sustainable Development Goals (SDGs) through strategies, policies, plans and actions. Climate change is not a separate issue from other development issues, rather it amplifies the existing issues that demands additional resources and capacities. Understanding the future climate scenario, its potential impacts on respective sectors and the right technologies and approaches to adopt now by development sectors help minimise and avert the potential future impacts on the particular sector.

In order to ensure integration of climate change in development and enhance the capacity, the existing provisions for NAPA can serve as the foundation for NAP, despite the fact that it is not sufficient. Institutional mechanisms are required to ensure climate change integration in development at palika (municipalities),province and federal levels. These institutions should be permanent as climate change is going to affect next several decades. There exist some institutional mechanisms at the federal level at present in Nepal, such as Climate Change Council under the chair of Prime Minister and Multi-stakeholders Climate Change Initiative Coordination Committee (MCCICC). But these mechanisms are yet to function effectively. Two actions might be required to make them functional and effective 1) they need to be legally recognised by defining their roles, responsibilities and authorities in relevant acts, rules, regulations and legal documents, and 2) they need to have linkages with federal and palika governments. It is not necessary that there should be a separate institutional mechanism for climate change from federal to province and then to palika levels, but the institutional mechanism for climate change can also be integrated with other existing mechanisms given the functions can be delivered effectively instead of creating several such parallel organisation mechanisms for different issues.

Clear policies, strategies and legal mechanisms are needed to ensure that development sectors integrate climate change into their development programmes and ensure resources and capacity required to address the future potential impacts of climate change.

The existing uncertainties can be amplified by future developments in social, economic, cultural and political sectors. NAP needs periodic information on the best future scenarios of these sectors to make it more effective. Such information needs to be ensured at federal, province and palika (municipal) levels for effective development planning and implementation. A strong climate science will help minimise uncertainty in future climate predictions or scenarios. A federal level climate science mechanism under the relevant ministry needs to be established, its capacity needs to be enhanced and institutional mechanism should be established to ensure this federal level institution or organisation has access to province and palikas to ensure that province and palika level governments have access to such climate information and use it.