In the changing context, the Government of Nepal, with the goal of contributing to socio-economic prosperity by developing climate resilient society, has released a Climate Change (CC) Policy in August 2019 by repealing the 2011 CC Policy.

Greenhouse gas (GHG) emissions from our two neighbours – China and India – may impact Nepal's population and resources. During the adoption of the UN Framework Convention on Climate Change (UNFCCC), about one-fourth of the total global GHGs emission was from USA. Now, China ranks first and India ranks third in the share of total global GHGs emissions. However, per capita emission of both countries, China and India, is low as compared to the developed countries. In the recent years, several countries are responding to the root cause of climate change.

Climate change has become a political issue. Countries have adopted a number of response measures through policy and institutions to address climate change impacts. India has recently admitted 'not to follow carbon-intensive development path', i.e., fossil fuel-based economy but to adopt 'low carbon development path' with well-targeted actions. China has announced goals of peaking carbon dioxide (CO2) emissions and increase share of non-fossil fuels to around 20% by 2030, and lower emissions per unit of GDP by 60-65%, and increase forest stock volume by around 4.5 billion m3 from 2005 levels by 2030.

The UN Secretary-General, António Guterres, hosted Climate Action Summit on 23 September 2019 in New York to boost ambition and accelerate action to implement the Paris Agreement and called on all leaders to attend the Summit with concrete and realistic plans to enhance their nationally determined contributions (NDCs) by 2020 and to net zero emissions to 2050. Upon the call of a 16-year youth Ms. Greta Thunberg, millions of people attended the Climate Strike and Friday for Future on 20 September 2019 in about 163 countries. She called to listen to science.

In the changing context, the Government of Nepal, with the goal of contributing to socio-economic prosperity by developing climate resilient society, has released a Climate Change (CC) Policy in August 2019 by repealing the 2011 CC Policy. The former 2011 Policy specified 7 target goals, including establishment of a Climate Change Centre, initiation of climate change adaptation (CCA) and formulation of a carbon trade strategy within a year and formulation of strategy on low carbon economic development strategy within 3 years, and conduction of economic assessment of loss and damage in key development sectors from carbon change. The former policy focused in mitigating impacts of climate change realizing Nepal's negligible GHGs emissions. Within the last 8 years, Nepal has implemented a number of adaptation options, and conducted economic assessment on the impacts of climate change in key economic sectors – water resources and agriculture, and generated and shared knowledge, lessons and learning. People from the field to policy level talk about climate change impacts.

As discussed in previous article (https://www.spotlightnepal.com/2019/03/30/climate-change-policy-draft-building-learning/), the Policy follows theme-based approach and includes single policy with number of non-separated strategies and working policies in 8 thematic areas and 4 cross-cutting areas.

Although the draft CC Policy (March 2019) undermined the importance and deleted the channelling of over 80 percent of the total budget for field level activities and establishment of climate change centre, these aspects are included in the approved Policy. The 2019 Policy provides space to establish institutional linkages between three tiers of governments. The Federal Government is made responsible to, inter alia, formulate and implement policy, law and standards, national adaptation plan, access to and mobilise financial resources, prepare carbon registry, coordinate & facilitate carbon trade, and promote coordination, joint-action and participation. The Provincial Government is responsible to prepare and implement provincial policy, guideline, standard and plan, monitor mitigation and adaptation programmes, and coordinate with Federal and Local levels. The Policy empowers the Local Governments to implement activities related to mitigation and adaptation, and carry out monitoring and evaluation and documentation of projects and programmes within their jurisdiction.

The 2019 Policy commits to formulate and implement laws, strategies, working policies, guidelines, procedures, manuals and plan at Federal, Provincial and Local levels to implement this Policy. It commits to revise or formulate and implement National Framework on Local Adaptation Plan for Action (LAPA), National Adaptation Plan (NAP), REDD Strategy, Climate Finance Framework and Budget Code, Green Growth Strategy, Gender Mainstreaming in Climate Change Action Plan, and other climate change documents. The Policy recommits to formulate national strategy on low carbon economic development, and carbon trade (as reflected in 2011 Policy) and prepare roadmap to the Paris Agreement, NDC, National Adaptation Plan of Action and Transparency Framework. Associations are required to take prior approval of the Ministry of Forests and Environment before implementation of climate change-related projects with donor's support. The Ministry will publish an annual report with climate change activities implemented by the government institutions and NGOs. It also mentions to review and evaluate the Policy every five years and formulate and implement long-term strategy on climate change.

Although the 2019 Policy has overlooked the state of implementation of the 2011 Policy, it is difficult to find 'fundamental policy departure' in any thematic and cross-cutting areas in the new Policy in the changed context. Theme-based approach, as previously followed in NAP formulation process, has increased repetitions in capacity building, technology development and expansion, efficient use of water or energy efficiency and efficient technologies. Some of the new areas in 2019 Policy are to develop and expand 'payment for ecosystem services', construct pond to collect rain water, 'black carbon' & carbon storage, cycle lane in urban roads, emission measurement, monitoring of emission mitigation and multiple 'forms' of climate finance. Several policies are continued along recommitment on development of low carbon economic development strategy which was drafted in 2013 and received multi-stockholder inputs. Some policies are 'forcefully linked to climate change' as they are already included in sector policies.

The 2011 Policy prioritised on CCA and this 2019 Policy has a goal of climate-resilience. The policy gives impression of Nepal's emphasis in reducing GHGs emissions and is almost silent in mitigating adverse impacts of climate change. May be typo-error, approved years of NAPA and LAPA are incorrect. The Policy has favoured for 'mainstreaming' than 'integration'. The 2019 Policy lacks targets unlike of 2011 Policy. In a nutshell, it opens avenues for review, every 5 years. With positive outlook, impacts of this 2019 Policy will be better understood in 2024. Non-targeted and non-time bound policies may follow 'will do tomorrow' approach. 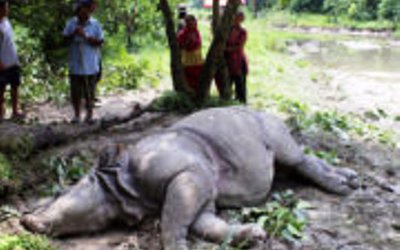 Popular Bollywood Singer KK Passes Away At The Age Of 53 By Agencies 2 months, 2 weeks ago

Tiger Census To Begin On December 5 By Agencies 8 months, 2 weeks ago

COP26 Nepal Visible By A Correspondent 8 months, 3 weeks ago