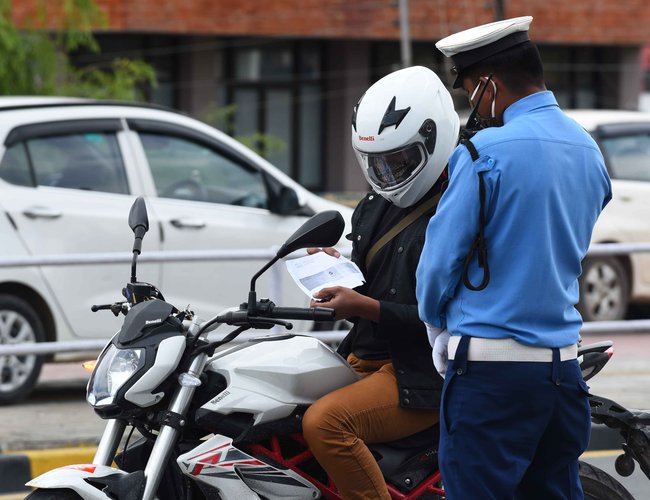 In a bid to reduce air pollution and its effects on people, the Department of Environment is going to start strictly inspecting the vehicle emission from December 16.

Issuing a notice on Thursday in the Gorkhapatra Daily, the Department informed that they will be conducting surprise inspection in different parts of the Kathmandu Valley. “If a vehicle is emitting harmful gases more than the set standards, they will be fined up to Rs. 100,000,” (US$ 800) the notice reads.

The step has been taken under Section 41 of the Environment Protection Act, 2019. It states that the director general of the Department may impose a fine not exceeding one hundred thousand rupees on a person or body that violates orders of the government from the point of view of environmental protection.

The Department also stated that the strictness was a result of several vehicles failing the emission test in the past few days. Even the vehicles with green stickers, a pollution clearance certificate from the government authorities, failed the test.

On December 2, a surprise check was conducted in Babarmahal, Kathmandu, by a joint team of officials from the Department, Department of Transport Management and Kathmandu Valley Traffic Police Office.

Among 54 vehicles stopped for inspection, 38 failed the test. Among the 38 vehicles, 25 had other technical issues as well.

Similarly, on December 4, 11 vehicles failed the test and were sent to Transport Management Office, Ekantakuna, for further legal process. Also, on December 6, three more vehicles were penalised for failing the test.

Traffic Police informed that they confiscate the vehicle documents of such vehicles and ask them to repair the vehicles, pass the pollution test and pay the fine to retrieve the documents.

The step to inspect vehicles and penalising a hefty fine is expected to lead vehicles’ repair and maintenance. Regular maintenance will reduce GHG emissions to a great extent, officials informed.

Nepal Government Is Preparing To Declare 'Climate Emergency' By Agencies 4 months, 2 weeks ago