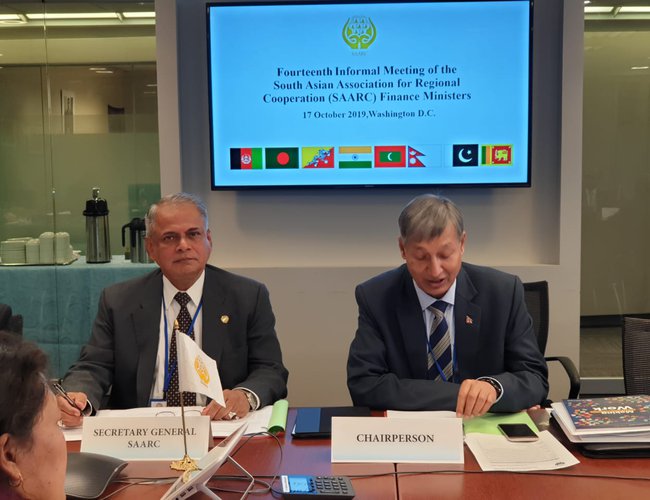 The Secretary General said that SAARC looks forward to strengthening cooperation and partnership with the World Bank for achieving the goals of poverty reduction, enhancing economic cooperation and regional integration, trade facilitation, improving financial accountability, and capacity building, in conformity with the MoU signed between the two organizations in 2006.

He said that the theme of this Meeting bears considerable significance in view of the increasing emphasis being given to regional economic integration. This is one dimension of the visionary goal set by our leaders for achieving the South Asian Economic Union (SAEU) in a phased and planned manner through creation of a Free Trade Area, a Customs Union, a Common Market, and a Common Economic and Monetary Union.

He said that for deeper regional economic integration and promotion of intra-SAARC trade, it is necessary to work collectively to bring down tariffs; eliminate non-tariff barriers (NTBs) and para-tariff barriers (PTBs); reduce sensitive lists under SAFTA; enhance energy cooperation; implement SATIS; improve regional connectivity by rail, road, air and maritime; introduce measures for visa facilitation; finalize the SAARC Agreement on Promotion and Protection of Investments; widen the scope of the SAARC Agreement on Avoidance of Double Taxation and Mutual Administrative Assistance in Tax Matters; and harmonize customs procedures and documentation to facilitate movement of goods and services across the region.

UN Commences International Day of Commemoration In Memory Of The Victims Of The Holocaust By NEW SPOTLIGHT ONLINE 1 hour, 49 minutes ago