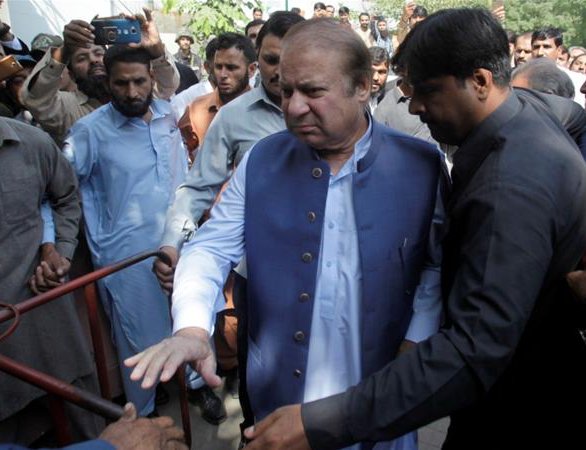 A Pakistani court has temporarily suspended the sentence of former Pakistani Prime Minister Nawaz Sharif for eight weeks after his doctor reported that he was "critically unwell" and fighting for his life.

Sharif, 69, is being treated at a government-run hospital in the eastern city of Lahore, where a court last week granted him indefinite bail on medical grounds due to his condition, after he was jailed last year following a conviction for corruption.

An Islamabad court granted him an eight-week suspension on his seven-year jail term in a separate case on Tuesday.

On the same day, Dr Adnan Khan, Sharif's personal physician, posted on Twitter to say the former three-time prime minister was "fighting the battle for his health [and] life".

"He is being treated [for] a low [blood] platelet count, but we have been unable to ascertain what is the cause for the low platelet count," Khan told Al Jazeera by telephone.

"There is a high suspicion of an underlying malignancy," he said, indicating that there is a possibility Sharif may be suffering from a tumour.

Khan is a member of the six-member government-constituted medical team that is treating the former prime minister.

The physician said Sharif was suffering from a consistently low blood platelet count, while also having suffered a non-ST segment elevation myocardial infarction, a type of heart attack.

Blood platelets are a type of cell that allow blood to clot more easily, with a low count indicating a significant risk of internal or external bleeding.

He said that the political leader needed a PET scan, bone marrow biopsy and lymph node biopsy, but given his weakened state carrying these out was a risk.

Last week, PML-N leaders accused the government of having denied Sharif humane conditions and medical care while he was in prison.

The government denied the allegations, and on Thursday, Prime Minister Imran Khan directed authorities to provide Sharif with "the best possible healthcare".

Sharif was dismissed from office in 2017 by the country's Supreme Court, which ruled that he had lied on a parliamentary wealth declaration and ordered authorities to prosecute him for corruption.

In July last year, he returned to the country following a conviction in one of three corruption cases filed against him. He was convicted in a second case in December and is serving a seven-year sentence.

Sharif's latest health crisis comes at a time when his party is backing an anti-government protest march led by the right-wing Jamiat Ulema-e-Islam (JUI-F) party.

On Tuesday, protesters entered the country's central Punjab province, promising to march on the capital Islamabad by later in the week.