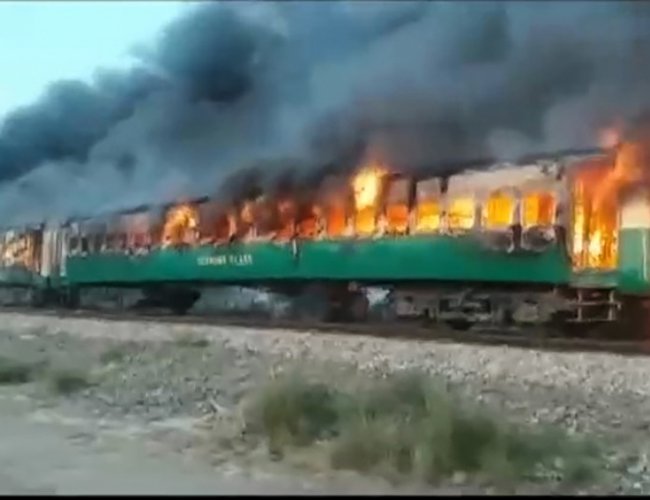 At least 65 people have been killed in Pakistan after a fire on a train in Punjab province. Authorities believe it was caused when gas stoves - being used by passengers - exploded. They say several people were killed when they jumped from the train to try to escape the blaze.

At least 65 people have been killed and 45 others injured after a fire engulfed a train travelling through central Pakistan, completely destroying at least three coaches, officials said.

The accident took place near the town of Liaquatpur, about 150 kilometres (93 miles) south of the city of Multan on Thursday morning, Railways Minister Sheikh Rashid Ahmed told Al Jazeera by telephone.

"The death toll could rise further," said Muhammad Asfandyar, a local hospital official. He said all of the injured are being treated for burn wounds.

The train was carrying passengers from the southern city of Karachi to Rawalpindi.

"The injured have been taken to the hospital, but unfortunately there is no nearby hospital [with a burn unit] so we are trying to get them by helicopter to Multan," Ahmed said.

The two affected coaches were "overcrowded", he added. Each coach typically holds about 70 passengers.

"One of the stoves exploded, causing the fire and the other one exploded with it," said Faisal Niaz, an official with the minister's office. 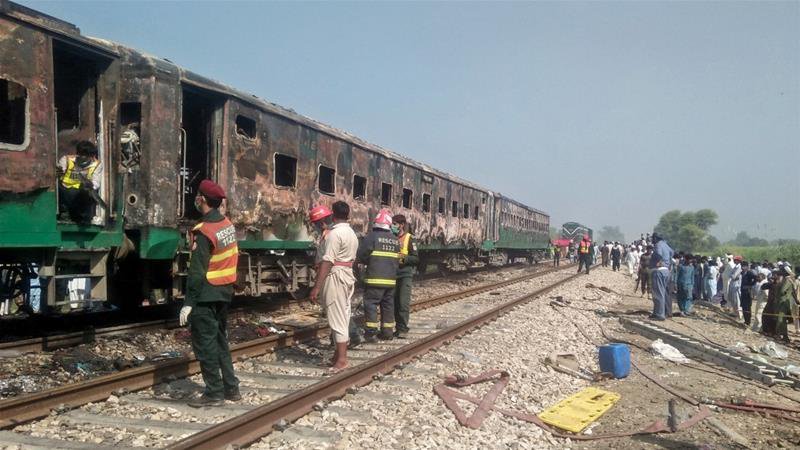 Ahmed said firefighters had completed their work at the site of the blaze.

"Rail service has been resumed on the tracks and rescue work is completed," he said. "The fire is under control."

Pakistan's ageing railway system is still based in many areas on colonial-era infrastructure, and accidents have been a frequent occurrence in recent years.

Security on intercity rail transport is also laxer than other forms of transport.

"A tragedy that could have been avoided but ever since I can recall while travelling by train no baggage check or restrictions enforced," said Pakistani Minister of Human Right Shireen Mazari following the accident.

Over 10 Reportedly Killed In Myanmar Protests By NEW SPOTLIGHT ONLINE 2 days, 7 hours ago

Elections Is Just A Month Away: Alliance Is Making Is Making By Agencies 5 days, 6 hours ago

US Carries out Airstrikes In Syria By Agencies 5 days, 7 hours ago