PM Modi Expresses Satisfaction At the Progress of Nepal-India Relations

PM Modi Expresses Satisfaction At the Progress of Nepal-India Relations 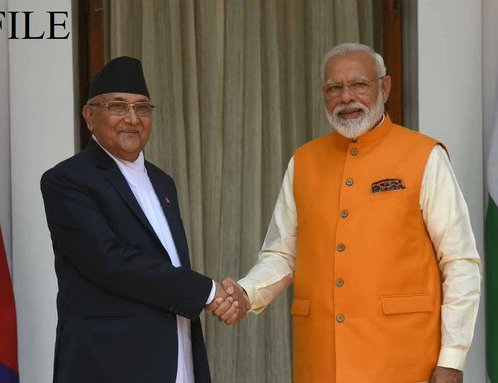 “In his conversation with Prime Minister Oli, the Prime Minister expressed his satisfaction at the progress of India-Nepal relations in 2019, with the completion of several projects. He specifically noted the completion of Motihari (India)- Amlekhgunj (Nepal) petroleum products pipeline in a record time. Both the leaders also agreed for an early inauguration of the Integrated Check Post in Biratnagar and the housing reconstruction project in Nepal through video conference,” said a press release issued by Press Information Bureau Government of India.

“This morning I had telephone conversation with Prime Minister of India Shri Narendra Modiji. We exchanged new year's greetings and best wishes. We shared that the year 2019 proved to be successful in elevating bilateral ties to new height,” twitted Prime minister KP Sharma. PM Modi expressed our confidence that the year 2020 will be equally successful in taking our relations to the next level by resolving pending issues. I renewed my cordial invitation to Modiji for a visit to Nepal.”

“Prime Minister conveyed to the leaders his New Year greetings and good wishes on behalf of the people of India and on his own behalf. He emphasized India’s commitment to ‘Neighborhood First’ policy and the vision of shared peace, security, prosperity and progress for all of India’s friends and partners in the region,” reports Press Information Bureau Government of India.

According to a press release, In his conversation with the King of Bhutan, the Prime Minister highlighted important achievements of the last year which have led to further consolidation of special ties between India and Bhutan. Prime Minister fondly recalled his last visit to Bhutan and the love and affection he received from the people there. He also emphasized the need to enhance youth exchanges between the two countries. Prime Minister also mentioned that he was looking forward to forthcoming visit of the King to India.

President of Sri Lanka Gotabaya Rajapaksa warmly reciprocated the wishes of Prime Minister and expressed confidence that India and Sri Lanka would further enhance their friendly ties in the year 2020. The two leaders reiterated their commitment to closely work together towards this end.

Prime Minister Modi wished the President of the Maldives and the people of the Maldives success in all their endeavors for development. President Solih warmly reciprocated Prime Minister’s wishes and expressed his keen desire to further deepen and strengthen the ties with India by enhancing the existing bilateral cooperation and exploring newer areas for working together.

Speaking with Prime Minister Sheikh Hasina, the Prime Minister, inter alia, congratulated her on being re-elected as the President of the Awami League for the next three years. Prime Minister also expressed his condolence on the untimely demise of former High Commissioner of Bangladesh to India Syed Muazzem Ali. Prime Minister noted the progress achieved in India-Bangladesh relations in 2019. He also stated that the upcoming birth-centenary of Bangbandhu and 50 years of the Liberation of Bangladesh and establishment of bilateral diplomatic ties provided important milestones to further progress of the close India-Bangladesh ties, which is a priority of his Government.

Local Levels Oppose To Shutdown The Schools By Agencies 2 hours, 9 minutes ago

Helicopter Used To Drop Water On Wildfire In Shivapauri By NEW SPOTLIGHT ONLINE 1 day, 3 hours ago

Nepal Requested India For The Supply Of COVID-19 Vaccines To Continue Administering The Second Dose By NEW SPOTLIGHT ONLINE 3 days, 2 hours ago