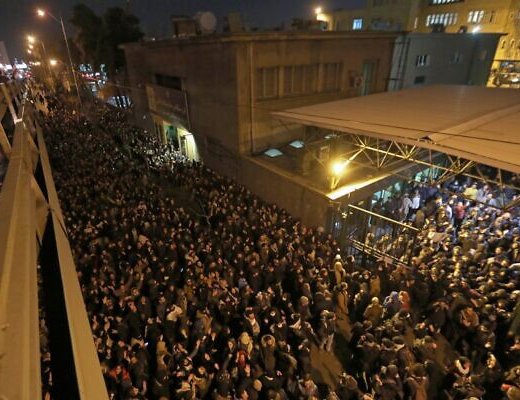 Thousands of people protesting in the capital after the government admitted to have accidentally shot down a Ukrainian plane that crashed earlier this week, killing all 176 people aboard.

Police dispersed the protesters with tear gas, according to reports and videos on social media. There were also reports of numerous arrests.

There were reports of internet shutdowns in the Islamic Republic in the wake of the protests, though the claims could not immediately be verified. The Iranian authorities have responded to demonstrations in the past by disabling internet access to limit protesters’ ability to communicate and share information on events with the outside world.

Videos posted to social media showed demonstrators outside Tehran’s Amirkabir University chanting against the regime and urging Supreme Leader Ayatollah Khamenei to resign. Calls included “Death to the dictator,” “Shame on you Khamenei, leave the country,” “Death to the liars,” and “Shame on the Revolutionary Guards, let the country go.”

The agency said Macaire was attempting “to organize, instigate and direct some radical and destructive action.” Reports on social media indicated he may have been taking photographs of the protest.

Today in #Tehran protest began due to the #IranPlaneCrash.
people chanting that they do not want the IRGC forces and the dictator leadership. #Iran #PS752pic.twitter.com/JI1FEKrexm

Tasnim said Macair was released after several hours but could be summoned later for further questioning.

The British government reacted with outrage, with Foreign Secretary Dominic Raab saying “The arrest of our ambassador in Tehran without grounds or explanation is a flagrant violation of international law.”

Raab said the Iranian government was “at a cross-roads moment. It can continue its march towards pariah status with all the political and economic isolation that entails, or take steps to deescalate tensions and engage in a diplomatic path forwards.”

The plane was shot down early Wednesday, hours after Iran launched a ballistic missile attack on two military bases housing US troops in Iraq in retaliation for the killing of Iranian Gen. Qassem Soleimani in an American airstrike in Baghdad. No one was hurt in the attack on the US bases.

Dozens of those who died were young Iranian students traveling to their studies in Canada. Some reports indicated that protests also spread beyond Tehran, and that some demonstrators were tearing up pictures of Soleimani.

The belated admission of responsibility raised a host of new questions, such as who authorized the strike on the plane and why Iran did not shut down its international airport or airspace when it was bracing for a US reprisal.

It also undermined the credibility of information provided by senior officials, who for three days had adamantly dismissed allegations of a missile strike as Western propaganda. Bulldozers had cleared debris from the site after the crash, in an apparent effort to cover up what had happened. 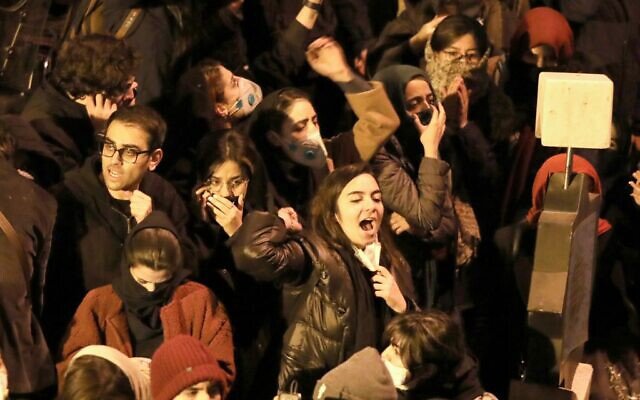 Iran’s acknowledgment also altered the narrative around its confrontation with the US in a way that could anger the Iranian public. Iran had promised harsh revenge after Soleimani’s death, but instead of killing American soldiers, its forces downed a civilian plane in which most passengers were Iranian and none survived.

“They concealed this huge tragic news for days just to mourn for Soleimani. Shame on you,” Reza Ghadyani said.

“You took your revenge from Iranians,” Ahmad Batebi tweeted. “Only resignation,” one Sadeq wrote.

“It is a national tragedy. The way it was handled and it was announced by the authorities was even more tragic,” Ali Ansari, a moderate cleric, said.

“They were so careful not to kill any American in their revenge for Soleimani. But they did not close the airport? This shows how much this regime cares for Iranians,” one woman, Mira Sedaghati, told the agency.

Gen. Amir Ali Hajizadeh, the head of the Guard’s aerospace division, said his unit accepts “full responsibility” for the shoot down. In an address broadcast by state TV, he said that when he learned about the downing of the plane, “I wished I was dead.”

Khamenei expressed his “deep sympathy” to the families of the victims and called on the armed forces to “pursue probable shortcomings and guilt in the painful incident.”

Iranians had rallied around their leaders after the killing of Soleimani, who was seen as a national icon for building up armed groups across the region that project Iranian influence and battle the Islamic State group and other perceived enemies.

Hundreds of thousands had attended funeral processions across the country in a show of support for the Islamic Republic just weeks after authorities had quashed protests ignited by a hike in gasoline prices. Iran has been in the grip of a severe economic crisis since US President Donald Trump withdrew the US from the 2015 nuclear deal and imposed crippling sanctions.

November saw mass protests held throughout the country over fuel price hikes, leading to two weeks of violence. Iran has yet to give overall figures for the number of people killed or arrested when security forces moved in to quell the unrest, which saw buildings torched and shops looted.

Human rights group Amnesty International put the number at more than 300 and news agency Reuters pegged the number of dead at around 1,500, including at least 17 teenagers and some 400 women.