Nepal and historical Tibet have shared a longstanding relationship. Tibet remained a country without a written constitution, until its status changed to an autonomous province of China. The Tibetan system did not contain elements that could have contributed to the development of a constitutional framework as derived by Padma Shamsher. 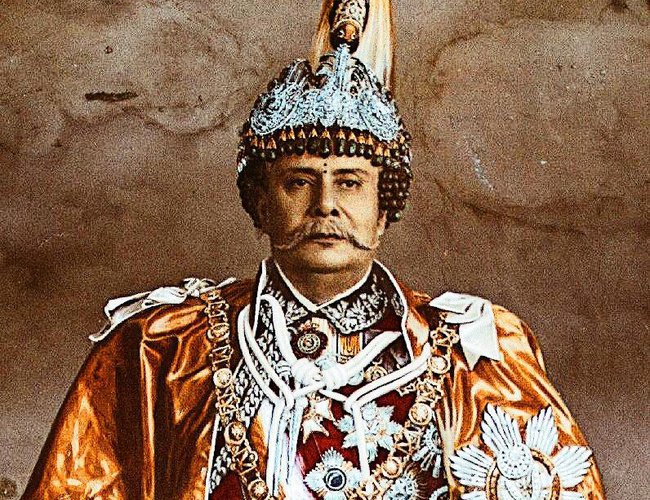 In 1947-48,Prime Minister Padma Shamsher drafted the first Constitution of Nepal, and his external environment during this time was limited to a few spheres of influence. Nepal had diplomatic relationships with historical Tibet (i.e. the Tibet in 1948 and prior), China, Britain and India, and the Nepalese had reasons to be informed of their systems of governance due to such diplomatic relations.

Nepal and historical Tibet have shared a longstanding relationship. Tibet remained a country without a written constitution, until its status changed to an autonomous province of China. It was influenced by Buddhism in its spiritual and temporal manifestation.However, as this article argues, the Tibetan system did not contain elements that could have contributed to the development of a constitutional framework as derived by Padma Shamsher. This is still important as a point of reference, because it helps to know the significance of Padma Shamsher's Constitution given the environment in which it was enacted.

Like Nepal, historical Tibet was also an inaccessible territory. Tibet was largely a high plateau surrounded by mountains and divided into three geographical areas:the central plateau, the valleys of the upper Indus and Brahmaputra river systems and the fertile lower regions of eastern Tibet. The Tibetan people are related to the Mongols of Mongolia and China's Inner Mongolia Autonomous Region, but are themselves a separate race with their own language, culture and religion. Historically, they were pastoral people who raised animals like oxen, yaks, sheep and horses. As such, Tibetans used to spin wool for their own usage as well as for export, and irrigation in the plateau and fertile valleys provided wheat and barley for local consumption.

As previously stated, Buddhism played a major role in shaping Tibet's social structure, government and customs since the religion was introduced in the region in the seventh century. According to a document of International Commission of Jurists (ICJ), a highly developed and distinct religion, together with the centralized institution of the lamasary, shaped Tibet's social and political life and strongly influenced Tibetans outside Tibet as well. This remains the case even now.

Due to Buddhism's prevalence in much of Tibetan life, and the people's lack of willingness to transform it, political institutions were unable to develop in the region. Monasteries were dispersed throughout the country and functioned as the region's religious administration, forts, granaries and guardians of Tibetan culture and centers of education. Additionally, Tibetan Buddhism, unlike Mahayana Buddhism, upholds the system of reincarnation, wherein the spirit of the Living Buddhas is reincarnated or reborn in living persons. As such, the Dalai Lama is the spiritual and temporal ruler and is regarded to be the reincarnation of the Tsong Ba, the founder of Tibetan Buddhism. The Panchen Lama is considered second to the Dalai Lama and, before 1950, had no claim of succession to the throne of the Dalai Lama.

As the ICJ report points out, Tibetan Buddhism is also known as Lamaism, a form of Tantric Mahayana that can be traced to ancient Hindu and Vedic practices as well; Tantric Mahayana was degenerating Buddhism, and symbolism and magic formals were overshadowing Buddhism's real teachings. Lamaism, however, did contain some aspects of the native Tibetan religion, specifically the belief that countless spirits and demons control a person's life, and such a person attempts to control or appease such beings through the use of magic spells and formulas. Thus, in Lamaism, the Eternal Buddhas of Mahayana are considered to be powerful, rather than benevolent, spirits who use their might to subdue demons and force them to serve man. Tibetan art, likewise, reflects this fierce, superdemon-like portrayal of Buddhas. Typically, this aid from the divine is appeased through sacred texts, repetition of certain prayers (e.g. Om mani padme hum) and ritualistic formulae having magical powers.

Some scholars argue that while Tibet has features of a purer Buddhism (e.g. wherein its monastic centers have supported Buddhist learning via accurate translations of sacred texts, a theistic theology has been developed in its Adi-Buddha doctrine and Buddha's teachings are communicated to the common person), sacred texts are often valued for their magic power against evil forces rather than for their guidance to truth and a higher life.Additionally, Lamaism is also characteristic of the identification of religion and state, as historical Tibet functioned almost as a theocracy, wherein the Dalai Lama and the grand lamas of the various monastic centers, with thousands of lamas or monks under them, ruled the nation.

In some monasteries in historical Tibet, the position of the grand lama was purely hereditary, regardless of his spiritual fitness. Where ideals of celibacy prevailed, grand lamas, or abbots, were believed to be successive incarnations of a Bodhi-sattva or of a predecessor. The Dalai Lama himself was regarded as an incarceration of the Bodhi-sattva Chenrezi (Avalokitesvara) and wasreferred to as the "Living Buddha." In this way, the rule of the Dalai Lama was given divine sanction, and the close ties between religion and the state accounted for Lamaism's influence in Tibet.

As a historical reference, it may be noted here that after the Chinese Revolution of 1911, which ended with the collapse of the Qing dynasty, Amdo, a region in northern Tibet, came under the rule of Hui Muslims. Prior to the Chinese Revolution, the majority of the Tibetan region was dominated by the Mongols, who were in favor of the Dalai Lama, although the Dalai Lama’s government was unable to establish any political, military or fiscal control over the region.

After the Mongols’ fall in 1724, the Qing dynasty established Xining (or Amdo) as the administrative region of Qinghai province and continued to allow large Tibetan monasteries, such as Labrang, Repkong and Kurdi to retain considerable power over the Tibetan population. With the takeover of the Amdo region, the Hui Muslims pushed down south, but were challenged by the authority of the Golok tribal chiefs and failed to dominate the areas. Therefore, the Golok and Sokwo tribes (ruled by kings) and the tribes headed by secular leaders and monasteries enjoyed independent influence until Tibet’s integration into China.

As Pirie (2013) explains, there existed no formal or centralized political control or administration in the Amdo region, although the Hui Muslims established some extent of fiscal and administrative control over sects of largely agricultural Tibetan populations. Under the monasteries' rule, headmen were appointed to the group of tribes under its jurisdiction; under the influence of Labrang, for example, the headman, who was a monk, held office for three years, rotated between various tribes, settled arising issues and assigned headmen to smaller groups.

Additionally, if conflicts arose and the headman was unable to resolve it or there was a lack of community consensus, it would be referred to the monastery or, in serious cases, to a senior lama, who would act as a mediator. In this way, the monastery exercised some sort of legal control over matters. Where monastery rule was missing, tribes were headed by an elder man or hereditary rulers, who would all perform similar functions as the headmen and occasionally called on senior lamas (even those from outside their own monasteries) to resolve conflicts between ruling families.

Gushi Khan, a Mongol prince, in 1642 declared the head of the Gelugpa sect of Tibetan Buddhism, the Fifth Dalai Lama, as holding supreme authority over Tibet, both as a religious as well as a temporal ruler, as Choedon (1996) explains.His rule was legitimized because he was believed to be the reincarnation of Avalokiteshvara, the Bodhisattva of compassion, or the founder and protector of the Tibetan race, and he enjoyed military protection provided by the Mongols and the Chinese. The Lord Chamberlain, the Chikyab Kenpo, served as the Dalai Lama’s link between his religious and secular administrative staff and was selected by the Dalai Lama himself.

The administrative system was headed by a Prime Minister and a cabinet, and during the thirteenth Dalai Lama’s rule between 1879 to 1933, he appointed three Prime Ministers, two layman and a monk who jointly decided on state matters, although the final authority still lay with the Dalai Lama. Additionally, the executive functions were handled by the Kashag or the Cabinet, composed of four ministers (three of whom were lay officials and one of whom was a high-ranking monk official), and together, they handled internal administration matters relating to politics, revenue, justice and policy making (led by the Dalai Lama).

On the other hand, the peak ecclesiastical secretariat, the Tsuigtsang, led by four high monk officials, handled the religious administration, dealing with all monk officials-related and monastic issues, as well as some nonsecular issues, including civil suits. The lay officials were selected from aristocratic families, who were allowed to retain their estates in exchange for providing one son to serve in government. Additionally, the government structure also had a National Assembly, representing the whole nation, including lay and monk officials, representatives of all classes and professions, totaling about 700 people and being called for only during major decision making procedures or emergencies and without any legislative function or control over the executive.

While theoretically, Tibet had a centralized system of government, its regional and local reach was limited, and the system relied on high cooperation between people in the community. This system gave way for indigenous leadership and organization and significant social and political autonomy; for example, important issues were taken up by community meetings and petitions were sent to regional or central government through the headman. In cases of abuse of power by leaders, the people had the capacity of appealing to the central government in Lhasa and even the Dalai Lama himself.

Lawmaking and a systematic, centralized judicial system was largely lacking in the Dalai Lamas’ regime, Halle argues, and there existed a mostly unsystematized administration of justice which lacked legal professionals (except in Lhasa, where government officials were designated to be judges). The outcomes of legal cases often took the form of mediation and an agreement between the parties. Additionally, criminals (e.g. traitors) were tried and punished, although high ranking officials, often monks, were reluctant to become very involved with the conviction, often referring cases back to the local level authority, Pirie (2013) writes.

In the given background, what Padma Shamsher created as a Constitution was certainly a modernizing document that would break the ice, and if implemented honestly, would pave the way for improved government and accountability system.

Professor Dr Adhikari is a senior constitutional expert and the founding dean of the Kathmandu University School of Law). He can be reached at [lawyers_inc_nepal@yahoo.com]

Why It’s In India’s Interest To Quell The Political Crisis In Nepal By Ranjit Rae 6 days, 23 hours ago