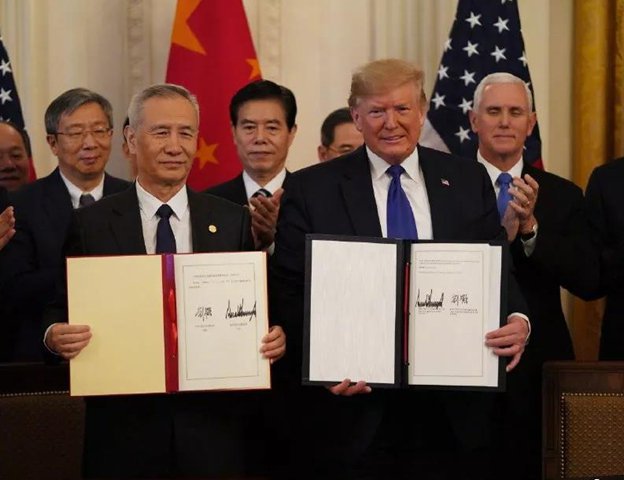 After a 22-month trade deadlock and dozens of strenuous negotiations, China and the US signed their first trade agreement in Washington on Wednesday, officially hitting the pause key on the punishing battle that has inflicted serious wounds on the bilateral relationship, their economies and the global economy.

President Donald Trump signed an initial trade deal with senior Chinese leaders that includes pledges from Beijing to more than double its purchases from American farmers in the first year.

The 86-page agreement comes after nearly two years of fraught negotiations and a punishing trade war between the world's two largest economies that hit US soybean producers especially hard.

American taxpayers have spent about $28 billion bailing out farmers, including payments to trade groups and purchases from food banks.

The pause in the trade war gives Trump something concrete to offer farmers, a crucial element of his Midwestern firewall, heading into the 2020 election.

"Together we are righting the wrongs of the past and delivering a future of economic justice and security," Trump said from the East Room of the White House just as lawmakers at the other end of Pennsylvania Avenue were preparing to vote on two articles of impeachment.

"Most people thought this could never happen," he said.

Trump said he'd visit China in the "not too distant future" to reciprocate a visit to Washington from China's top trade negotiator.

According to Global Times, the signing of the phase one trade agreement is expected to offer some much-needed certainty and relief for businesses in both countries and around the globe, but it remains to be seen whether the two biggest economic powers will be able to build on the momentum to address their considerable differences over a wide range of issues in a constructive manner, Chinese analysts noted.

Chinese Vice Premier Liu He and US President Donald Trump inked the widely expected phase one deal in a ceremony at the White House.

Among the key takeaways from the agreement was China’s pledge to increase purchases of US products over the next two years and the US commitment to roll back tariffs in phases on Chinese goods.

The agreement also covered areas of disputes between Chinese and US officials including the protection of intellectual property rights, technology transfer and an implementation review mechanism.

The signing of the deal presented a stark contrast to the tremendous hostility and brinkmanship between the two countries of the past 660 or so days and the theatrical back-and-forth in negotiations, including 13 high-level rounds.

“The overall signal from the phase one agreement is much larger than the content of the deal itself,” Wei Jianguo, a former Chinese vice commerce minister, told the Global Times.

“It is a boon for the world that the world’s largest and second-largest economies have hit the pause key in the trade war.”

Global equity markets have rallied in the lead-up to the signing and since the two countries announced the agreement in mid-December.

“The phase one deal means that China and the US have entered a new relatively predictable cycle,” Li Yong, a deputy chairman of the expert committee of the China Association of International Trade, told the Global Times.

“It will be able to help revitalize the global value chain disrupted by the trade war and remedy at least some of loss.”

The tariffs imposed by Trump had cost US companies $46 billion since February 2018, according to some analysis of US official data last week.

In China, the trade war has also been partially blamed for persistent downward pressure on growth.

Globally, it could result in $700 billion losses by the end of this year, according to the IMF.

The deal itself will benefit Chinese and US businesses in agriculture, energy and manufacturing, as big purchases take place amid reduced or canceled tariffs.

The US has called off new tariffs on $156 billion worth in Chinese goods in December and slashed by half a 15 percent tariff on $120 billion worth of Chinese products.

"Are we in an ideal spot? No," Lighthizer told reporters at the White House before the signing. "Is this a massively good first step? Yes."

Among the products China has promised to buy more of: soybeans, wheat, cotton and pork. A senior administration official told reporters that the US would be "actively monitoring" data sources from both countries to ensure that China is fulfilling its promise.

The initial deal provides better protection to American companies that have long complained of thefts of their intellectual property and trade secrets.

Rockets Rain On Tel Aviv As Violence Expands By Agencies 5 days, 22 hours ago