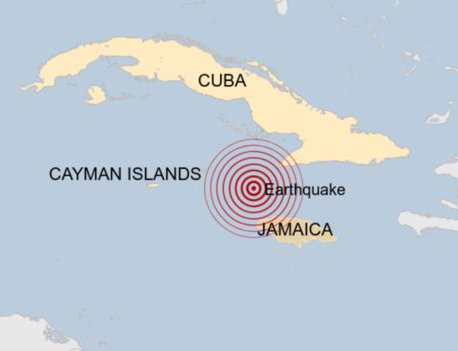 A powerful 7.7-magnitude earthquake has struck in the Caribbean, prompting brief tsunami warnings and office evacuations as far away as Florida.

The quake hit between Jamaica, the Cayman Islands and Cuba at a depth of 10 km (6.2 miles), the US Geological Survey (USGS) said on Tuesday.

Buildings shook and tremors were felt across the Caribbean, but there were no immediate reports of casualties.

Some offices were temporarily evacuated in Miami and parts of Jamaica. Warnings by the Pacific Tsunami Warning Center (PTWC) were later withdrawn.

The PTWC initially said "hazardous tsunami waves" were possible for coasts located within 300km (186 miles) of the earthquake's epicentre.

This included parts of Belize, Cuba, Honduras, Mexico, the Cayman Islands and Jamaica, it said. But in an update at around 20:45 GMT, the PTWC said the "tsunami threat had now largely passed".

The epicentre of the quake, initially reported as magnitude-7.3 before being upgraded, was 125 km north-west of Lucea, Jamaica.

Shaking was reported in the Cuban capital, Havana, in Kingston, Jamaica and Miami - some some 708 km from the epicentre.

USGS geologist Ryan Gold told the Miami Herald it was "completely reasonable" for a quake of that magnitude to be felt in Florida.

"It's a very large earthquake which can produce a lot of seismic energy," he said.