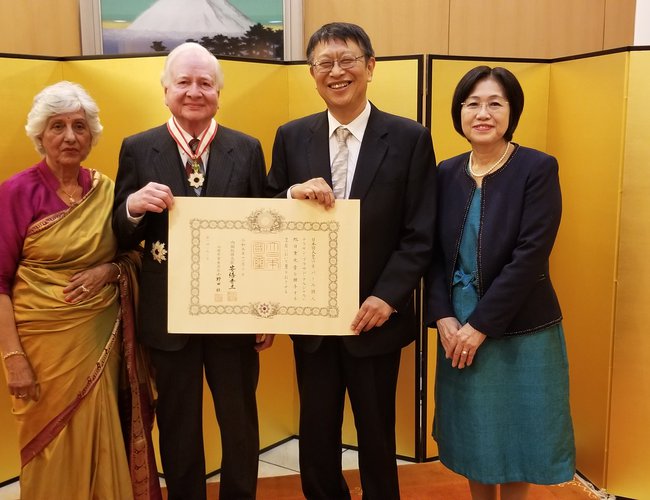 Arjel, who is among this year’s foreign recipients in recognition of his contributions towards strengthening the relationship between Japan and Nepal, received the Order of the Rising Sun, Gold and Silver Star.

Arjal, who is now 86 years old and served as Ambassador of Nepal to Japan from 1985 to 1991, contributed to the promotion of friendly relations between Japan and Nepal by strengthening economic cooperation with Japan in medicine, infrastructure and other areas, moreover by connecting the Royal Family of Nepal and the Imperial Family of Japan as well as local municipalities of both countries. He also made contributions for the Nepali pavilion at the Tsukuba Expo of Science and Technology in 1985 and at the Osaka Expo of the International Garden and Greenery in 1990.

Japanese Decorations are conferred upon foreigners twice a year, on 29th April and 3rd November concurrently with the conferment of decorations and medals to Japanese nationals.

The Order of the Rising Sun are bestowed upon individuals of merit, in recognition of their outstanding contribution to the nation or public, they also conferred upon foreign nationals who have made notable contributions to promotion of relations between Japan and other countries in such as politics and diplomacy, research and education, medicine and social welfare, economy and industry, and culture and sports.

“ I am very grateful to the Government of Japan for kindly conferring on me the high decoration on the Order of the Rising Sun Gold and Silver Star,” said Arjal. I served as Ambassador of Nepal to Japan

Mr. Arjal understood the importance of economic cooperation between Japan and Nepal

By Masamichi Saigo, Ambassador of Japan To Nepal

This evening I have the pleasure to present Narayan Prasad Arjal, former ambassador of Nepal to Japan, with the order of the Rising Sun, Gold and Silver Star. On 3rd November last year, the Government of Japan announced its decision to confer the Order of Japan on Mr. Arjal recognizing his contribution to strengthening and promoting Japan-Nepal relations.

Although many of you know Mr. Arjal very well, late me briefly mention his biography and achievements.

Mr. Arjal born in Saptari obtained a Bachelor Degree from Benaras University and a Master's Degree from Lucknow University in India. One year after graduation, he became the Founder Principal of Mahendra Morang Adarsha Multiple Campus in Biratnagar which is a constituent campus of Tribhuwan University. It’s hard for me to believe that such a young person could be the principal of a campus of the most prestigious university in Nepal. He must have been an extraordinarily gifted boy! Not only clearheaded but also passionate. During his student years, he actively participated in the armed revolution in Mahotari and Dhanusha districts for the democratization of the country in 1950. He is a very idealistic and patriotic man.

Mr. Arjal joined the Nepal Foreign Service in 1959 and climbed the bureaucratic hierarchy to become a joint secretary for neighboring countries, director General of Tourism, and the secretary of the Ministry of Works and Transport. Later in 1985, he was appointed as ambassador of Nepal to Japan. During his six-year tenure, Mr. Arjal worked hard for the success of two Expos in Japan by organizing a Nepali pavilion in each. These Expos were Tsukumba Expo of Science and Technology in 1960 attended by King Birendra, and the Osaka International Garden and Greenery Expo in 1990.

Mr. Arjal understood the importance of economic cooperation between Japan and Nepal as Japan’s ODA was growing fast, in the late 1980s and Nepal needed a good health system for its people and basic infrastructure for development. Mr. Arjal met with officials from the Ministry of Foreign Affairs of Japan and JICA almost every week to bring as many ODA projects as possible to Nepal.

Among these projects, he especially focused on the modernization of the public health systems in Nepal. Under his strong leadership, Tribhuwan University Teaching Hospital and Kanti Children’s Hospital expanded. It’s not an exaggeration to say that Mr. Arjal contributed to the improvement of the public health system in Nepal. It’s also worth noting that the famous Sindhuli Road Project, which is one of the largest grants given by Japan to a foreign country and which has brought tremendous economic benefits to Nepal, started during his tenure.

I really would like to express my sincere gratitude to Mr. Arjal for your service to enhance the relationship between both countries. I also personally congratulate you on your receipt of the Order of the Rising Sun, Gold and Silver Star and wish you all the best and good health.

Excerpts of the Statement delivered during the program.