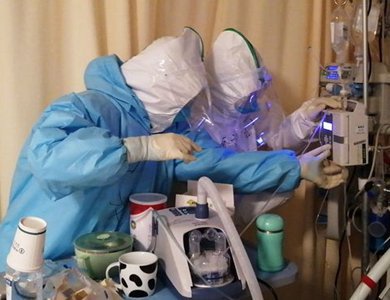 China reported 121 new deaths and 5,090 new confirmed cases on Februaary 13 in the Chinese mainland. According to China's National Health Commission, the total infection number soared to 63,851, with 1,380 deaths as of Feb 13.

Hubei Province reported 4,823 new cases of novel coronavirus pneumonia (including 3,095 clinically diagnosed cases) on Feb 13, with 116 new deaths and 690 cases of recovery. The total number of infections in the province climbed to 51,986.

Over 10 patients in serious conditions apparently improved after taking the products made of blood plasma containing antibodies donated by recovered patients. The products p

The province and its capital Wuhan, where the infection now known as COVID-19 is thought to have originated in late December, also reported a further 4,823 new cases of the infection, taking the total in the province to 51,986 and close to 65,000 across the country.

At least 25 countries have confirmed cases and several nations have evacuated their citizens from Hubei. Three deaths have been recorded outside mainland China - one in Hong Kong one in the Philippines, and the most recent in Japan.

Meanwhile, Vietnam has ordered a lock down on a community of 10,000 residents northwest of the capital Hanoi, becoming the first location outside of China to have ordered a quarantine for at least 20 days.

The COVAX Facility Will Deliver Its 65 Millionth Vaccine Dose This Week By NEW SPOTLIGHT ONLINE 1 day, 13 hours ago