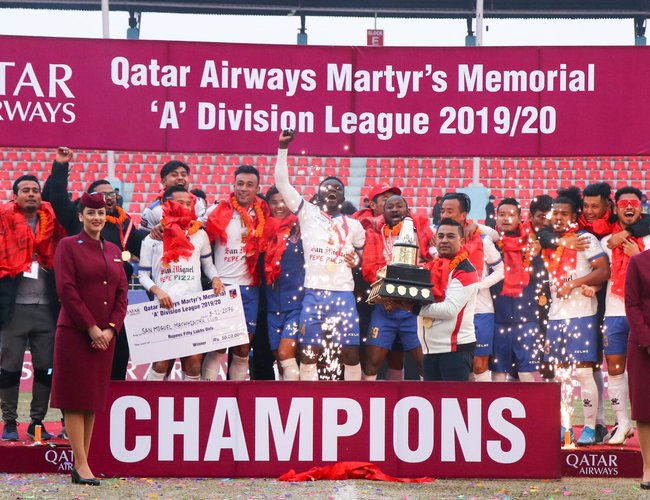 The Qatar Airways ‘A’ Division Martyr’s Memorial League 2019-2020 season concluded on Saturday with the final taking place at the Dashrath Rangasala Stadium in Kathmandu, Nepal.

Prior to the final, Qatar Airways hosted a week-long fan zone where fans enjoyed entertainment at the Sherpa Mall including green screen photography, face painting and goalscoring games against a digital net.

Qatar Airways Senior Vice President of Marketing and Corporate Communications, Ms. Salam Al Shawa, said: “We are delighted to be the partner of the All Nepal Football Association League 2019-2020 season, which has come to a successful end. At Qatar Airways, we are strong advocates of sport, aiming to bring communities together and promoting the values of sport at all levels. As an award-winning airline, this partnership is another example of our commitment towards building a diverse sporting sponsorship portfolio and our dedication towards the development of football in Nepal.

” Qatar Airways is proud to have developed a wide range of global sports sponsorships, supporting top-level sporting events and some of the world’s biggest football clubs such as Paris Saint-Germain, Bayern Munich, AS Roma and Boca Juniors. As official FIFA partner, Qatar Airways recently sponsored the FIFA Club World Cup Qatar 2019™ and will sponsor the FIFA Club World Cup 2020™ edition ahead of the FIFA World Cup Qatar 2022™.

Qatar Airways is also partner of CONMEBOL, the governing body for football in South America.

Tiger Woods Seriously Injured In A Car Accident By Agencies 1 week, 1 day ago