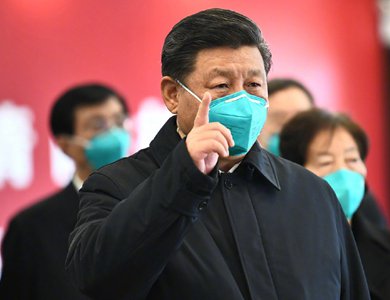 Chinese President Xi Jinping arrived in Wuhan, the epicenter of the COVID-19 outbreak in the country, on Tuesday for inspecting the epidemic prevention and control work in Central China's Hubei Province and its capital city Wuhan, sending a strong signal to the entire country and the world that China is ascending out of the darkest moment amid the outbreak, and the battle against the epidemic has now entered the next stage, analysts said.

Xi, also general secretary of the Communist Party of China Central Committee and chairman of the Central Military Commission, went straight to Huoshenshan Hospital after arriving in Wuhan, the epicenter of the COVID-19 outbreak, for inspection.

Xi learned about the hospital's operations, treatment of patients, protection for medical workers and scientific research there.

He also visited residents of a community in Wuhan who are subject to self-quarantine, looking into the community-level prevention and control work as well as daily necessity supply.

Xi's Wuhan visit at this moment shows the turning point of China's domestic fight against the epidemic has arrived and now the fight is shifting its focus to prevent imported cases of infection and gradually resume economic activities and production, analysts said.

Xi personally commands the people's war against the epidemic. He has been paying constant attention to the epidemic prevention and control work and made oral or written instructions every day.

After about two months of the epidemic control and prevention work, China is gradually coming out of the darkest phase as the nation is resuming social order.

Xi's first visit to Wuhan since the outbreak befell, reflects China's determination of scoring the victory in the fight against the COVID-19 epidemic, analysts said.

Lu Keli, an associate professor at the school of Marxism studies in the Renmin University of China in Beijing, told the Global Times that Xi's visit to Wuhan at this stage showed that China has achieved a phased victory in the current juncture that can help effectively stabilize and control the epidemic situation.

The situation across China manifested a positive trend as many provinces, municipalities, and autonomous regions maintained "zero growth" of new infections over a definite period, and even Wuhan, the country's epidemic epicenter, showed positive developments.

He also held a meeting aimed at comprehensively deepening the reform, one meeting on advancing law-based governance, one teleconference with 170,000 officials, reflecting his personal involvement in the response to the epidemic.

Such an extensive level of engagement was hailed as "a very rare leadership" amid the outbreak by Director-General of the World Health Organization (WHO) Tedros Adhanom Ghebreyesus. 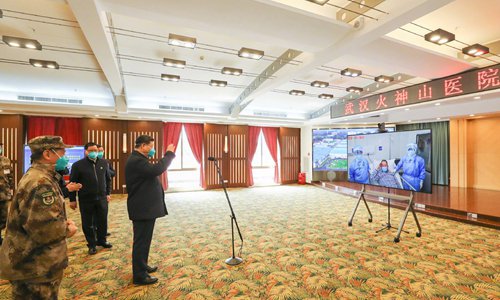 He held 15 telephonic talks with 14 heads of nations, including France, Germany, Saudi Arabia, and the US. Besides, he also met with WHO chief Ghebreyesus, and the heads of Cambodia and Mongolia.

Under Xi's command, China launched a people's war against the epidemic, with Wuhan and Hubei as the main battlefield, setting up lines of defense. Personnel and resources were mobilized across the country, according to the Xinhua News Agency.

People are inspired and encouraged by the president's deep concerns about the epidemic control work in Wuhan, analysts said.

"His visit also underscores the central government's strong will to restore normality in the whole society, and to achieve 2020 economic and social goals," Yang Zhanqiu, a Wuhan-based virologist, told the Global Times on Tuesday.

According to the Chinese news portal thepaper.com, all Fangcang makeshift hospitals are scheduled to close on Tuesday as the last group of 49 infected patients in a Fangcang hospital in Wuchang district of Wuhan, currently operational, will be discharged upon recovery. At present, there are 15,588 remaining confirmed cases in Wuhan, after the recovery of 31,973 patients .

Due to the impact of the COVID-19, not only the Chinese economy but also the global economy bit the bullet, as the US stock market saw the most serious decline since the 2007-2008 financial crisis while many countries in Northeast Asia, Europe and the Middle East are bearing the brunt of the outbreak, Lu said.

"Xi's visit to Wuhan also heralds a message of confidence to the world that China is ready to keep marching forward, and will also be very cautious to sustain this positive trend and strictly prevent the recurrence of the outbreak. Whether the Chinese or world economy, as well as the global financial markets, the confidence is essential for the recovery," Lu stressed.

Elections Is Just A Month Away: Alliance Is Making Is Making By Agencies 1 day, 12 hours ago

US Carries out Airstrikes In Syria By Agencies 1 day, 12 hours ago

A Massive Funeral Held For Woman Shot During Myanmar Protest By Agencies 5 days, 13 hours ago

Australian PM Is Vaccinated As Rollout Begins By Agencies 6 days, 12 hours ago