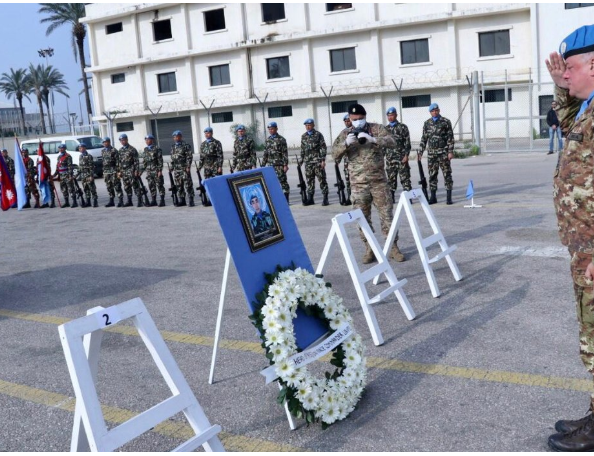 UNIFIL Head of Mission and Force Commander Major General Stefano Del Col was joined by Lebanese Armed Forces (LAF) representatives and fellow peacekeepers at a somber ceremony in the Rafic Hariri International Airport in Beirut today to bid farewell to a Nepalese peacekeeper who died last week in a tragic accident while serving for peace in south Lebanon.

Corporal Nar Bahadur Magar, 35, who had been serving with UNIFIL for four months, died as a result of injuries caused by an accident during logistical movement between two Nepalese UNIFIL bases in Meiss Ej Jebel, south Lebanon, on 10 March 2020.

According to a press rlease issued by UNIFIL,during today’s send-off ceremony in Beirut, Major General Del Col awarded him with the UN Medal posthumously for his dedicated service for peace and stability in south Lebanon. Lebanese Army representative Colonel Fakhri Chkeir also awarded him a Lebanese medal.

“We extend deepest condolences to his family. His wife and young daughter who must be bereft with sorrow, are in our thoughts and we are deeply sorry for their loss,” said the UNIFIL Force Commander, Maj. Gen. Del Col. “UNIFIL acts impartially and independently to maintain peace, and Corporal Nar Bahadur Magar bravely contributed to our efforts.”

A native of Dhading district in Nepal, late Corporal Magar had been with the Nepali Army for 16 years. He is the 30th Nepali peacekeeper to die while serving with UNIFIL since 1978, and is survived by wife (Bina Magar) and a daughter (Nerisha Magar).

Since UNIFIL’s establishment in 1978, more than 300 peacekeepers have died while serving for peace in south Lebanon.

More Cylinders Will Be Brought From China Via Tatopani Border: Foreign Minister Gyawali By Agencies 1 day, 3 hours ago