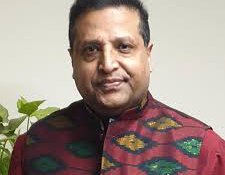 Basanta Chaudhary has announced to donate Rs. 10 million to a trust established by the government to fight against coronavirus. The cabinet on Sunday has decided to set up a Trust with Rs. 500 million rupees.

He announced this donation through Narvic and Basanta Chaudhary Foundation.

Chaudhary is the first businessman to announce a donation to the fund.

Local Levels Oppose To Shutdown The Schools By Agencies 1 hour, 51 minutes ago

Helicopter Used To Drop Water On Wildfire In Shivapauri By NEW SPOTLIGHT ONLINE 1 day, 2 hours ago

Nepal Requested India For The Supply Of COVID-19 Vaccines To Continue Administering The Second Dose By NEW SPOTLIGHT ONLINE 3 days, 2 hours ago