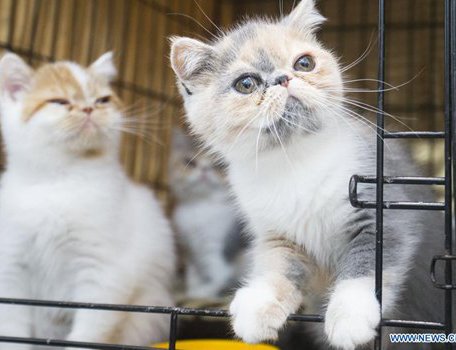 Cats are more susceptible to COVID-19 and spread the virus more easily to other cats via respiratory droplets, while dogs, pigs, chickens are not, Chinese scientists from the Chinese Academy of Agricultural Sciences recently found.

The study has raised concerns over whether the virus can pass between pets and people. At least two cats were reportedly tested positive for COVID-19 - one in Hong Kong, in addition to two dogs, and another one in Belgium.

"We found that COVID-19 replicates poorly in dogs, pigs, chickens, and ducks, but efficiently in cats and ferrets. We found that the virus transmits in cats via respiratory droplets," a group of scientists from the Harbin Veterinary Research Institute under the Chinese Academy of Agricultural Sciences found. They posted the paper in bioRxiv on Wednesday.

Results from experiments showed that COVID-19 can replicate efficiently in cats, with younger cats being more permissive, and the virus can transmit between cats via respiratory droplets.

During experiments, researchers introduced samples of the virus to the noses of five domestic cats and found viral RNA and virus particles in the upper respiratory tracts of two cats, which were euthanized six days later.

The three other cats were housed together with other uninfected cats. The team later detected viral RNA in one of the exposed cats, suggesting the virus transmits in cats via respiratory droplets.

But dogs have low susceptibility to the virus, researchers found, as experiments were conducted on five 3-month-old beagles who were intranasally inoculated with virus and two other uninoculated beagles.

One infected dog was euthanized on day four, but viral RNA was not detected in any organs or tissues collected from this dog, the team said.

No evidence has shown that pet animals could be a source of infection, the Hong Kong Special Administrative Region insisted on Tuesday, citing the city's Agriculture, Fisheries and Conservation Department.

The team also investigated the susceptibility of pigs, chickens, and ducks to the virus by using the same strategy as that used to assess dogs, and results showed that these animals are not susceptible to COVID-19.

All experiments were performed in the animal Biosafety Level 4 lab in the Harbin Veterinary Research Institute (HVRI) under the CAAS, which was approved for this use by the Ministry of Agriculture and Rural Affairs of China.

The laboratory is one of the four large-scale animal Biosafety Level 4 facilities in the world. It can conduct infection tests on all animals including horses, cattle, sheep, pigs, poultry, mice and monkeys. The lab was approved in 2018 by the China National Accreditation Service for Conformity Assessment.

The Wuhan Institute of Virology is a known Biosafety Level 4 lab.

Nepal To Launch COVID-19 Vaccine Drive From Wednesday By Agencies 2 hours, 37 minutes ago

COVID-19 Vaccines Will Reach In All The Provinces By Sunday By Agencies 1 day, 16 hours ago