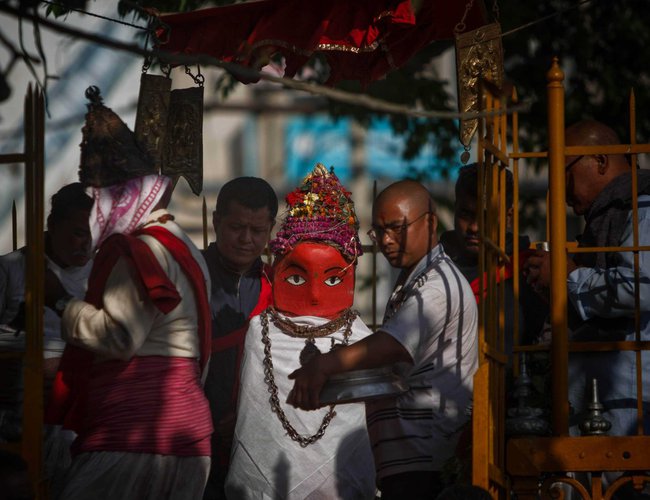 In a presence of few hundred devotees, who wore masks and maintained their social distancing, the festival begins reports Sulabh Shrestha in Deshsanchar.

As per the ritual, priest (Paju) power water on the statue of Rato Machhindranath. The clay brought from Mehepi used to bath the statue.

This function is first ritual before start of month long chariot festival of Patan. Bunga Dyah Jatra or the Jatra of Rato Machindranath is one of the longest running Jatras in the country Nepal.

This Jatra lasts for a whole month and the chariot that is built for this very Jatra is over 60 foot tall. The chariot is decorated with all kinds of garlands and other decorations. The chariot is constructed at Pulchowk at the western end of Lalitpur and when the chariot has been completed the image of Bugs Dyah is installed in the chariot which is brought from Bunga Dyah’s temple. Machindranath is a deity of rain and when he Rath is pulled it always rain, to signify that the god is pleased by what the worshipers are doing. This festival is mostly celebrated by the Hindu and Buddhist of the Newar community.

The rath pulling and the Jatras solely are believed and done by the people of the Newar community themselves. It is believed that the Mchindranath is the guardian of Kathmandu Valley; this belief has been going on since medieval times. Like in Patan, even in Kathmandu a rath is pulled, but this rath is of Seto Machindranath.

It is believed that Guru Gorakhnath had visited Patan in the Medieval days and as no one had recognized him, he had become upset and captured the serpents responsible for rain, and had gone Kathmandu to store them and then had started to meditate, a drought followed Patan and then the advisors king Narendra dev had requested him to bring Machindranath to Patan, because Machindranath was the teacher of Guru Gorakhnath from Assam, India.

When the Guru knew that his teacher had come to Patan, He immediately released all the serpents and then a huge rain followed the return of the serpents that brought the rain. It is believed that because the serpents had returned the rain always comes before the rath is pulled to wash away all the impurities and sins of the people.

As per time, on certain days, the rath is only pulled by women, this part of the procession of pulling the rath only by females is called Yakah Misaya Bhyjya , Meaning , and Only women’s group. This very part also shows that in the Newar community there’s equality among male and female. During the rath pulling, people watch the ceremony from rooftops and pour water on the people who are pulling the rath to cool them down. Various Lakhes are brought out as well, this is to appease the gods and goddesses as the Lakhes can bring about the gods consciousness to their bodies, the Lakhes parade the town with music accompanying them, various offerings are given to the Lakhes as well, and people tend to watch as the Lakhe dances to the tune of the music and eats raw meat and gulps down gallons of alcohol. The month long procession ends with Bhoto Jatra which is shown in Jawalakhel in the presence of the Kumari and the head of the state by one of the government officials.

The legend of Bhoto Jatra is that Once upon a time the Serpent God who lived with his queen in the Taudaha Lake, and one day the queen fell ill, worried the serpent god Karkotaka searched widely for a physician and at that time , Jyapus ( Newar farmers) were also called physician as they knew about the vegetation and its uses the most. So, the Serpent god asked for his help and as he went to help the queen with various herbs , the illness was cured. Being pleased with this, the serpent god gave the farmer with many bountiful gifts and among these gifts were a Bhoto decorated with ornaments, it glimmered and shone , the Farmer used to wear the Bhoto in special occasions only, and one day a Ghost saw the Bhoto being worn by the Farmer and this made the Ghost want the Bhoto because of its beauty.

The Ghost would follow the farmer everywhere just to get a chance to take the Bhoto away from the Farmer , But the chance did not come until one day, when the Farmer went to the field to work wearing the Bhoto, and as on that very day the heat was at its peak, the Farmer took off his Bhoto because of the heat, and he kept the Bhoto in a Basket with all his other belongings, the Ghost had followed him to the field as well, as he saw the chance of being able to take the Bhoto that was of such beauty because of the ornaments embedded in it .

The Ghost took away the Bhoto and as the Farmer noticed what had happened , it was too late, As the farmer ran after the Ghost, he couldn’t catch up to the Ghost ,and he was devastated that he had lost his most prized possession, The farmer thought about how to get the Bhoto back and realized that the rath of Rato Machindranath would be pulled in a few days and on that event , even the ghosts and other spiritual beings would come down to worship the rain god , to get his blessings, and the farmer immediately waited for the rath to be pulled in Jawalakhel, where even the ghost that had taken his Bhoto was present, The farmer visited the Jatra as he knew even the ghosts would be visiting it , and as he went to the event amongst the crowd he saw the Ghost wearing his Bhoto, He crept towards the Ghost slowly and then grabbed him, soon a fight broke out between the farmer and the ghost and it caused a huge commotion during the rath pulling ceremony.

King Guna Kamadev had also attended the rath pulling ceremony and had noticed the commotion, As he brought both the ghost and the Farmer before him, the king asked whom the Bhoto belonged and both party said it belonged to them, seeing this the King asked for a proof, to which both of them didn’t have one, so the next day the Farmer went to the serpent god and asked for his presence to prove that the Bhoto was indeed of the Farmer.

The story of the Bhoto Jatra Festival

The farmer even told the serpent god how the ghost had stolen his Bhoto and now claimed it to be his. Hearing this the serpent god said he would be present the next day during the rath pulling ceremony and tell the King Guna Kamadev that it indeed belonged to the farmer, but the next day, the serpent king didn’t show up and as both the parties couldn’t prove to whom the Bhoto belonged to. The King gave its authority to the Machindranath Guthi of Patan. The Bhoto was then stored alongside the image of Rato Machindranath and every year, at the end of the rath pulling ceremony the Bhoto is brought forth and shown to the people in hope that someone would come with a proof and take the Bhoto away. As per customs this

Bhoto is stored with the image of the Machindranath after the procession has been completed and then the month long festival concludes, in Jawalakhel.

With support from various online and blogs