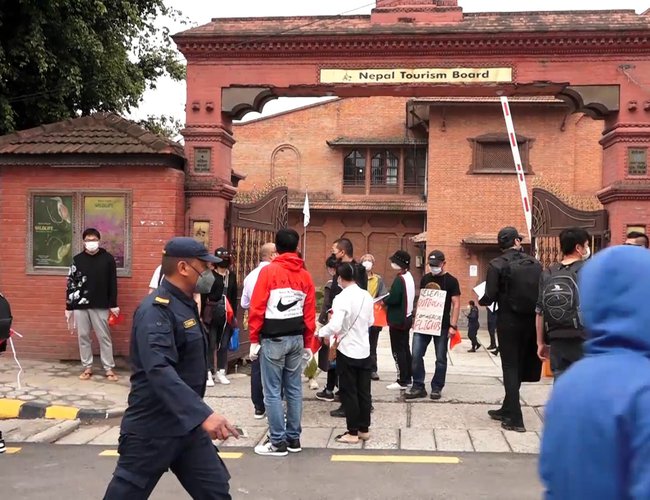 At a time when many countries have already repatriated their citizens, some Chinese nationals who have been stranded in the country urged Nepal Tourism Board (NTB) seeking its support to return home.

Tired of waiting for repatriation flight from China, a group of Chinese knocked the door of NTB. They reached NTB carrying placards and urged the board to coordinate with the Chinese government to repatriate them.

After the Chinese embassy did not respond to the requests of the stranded Chinese nationals they have sought the support of the tourism board NTB official Lila Baniya told to The Himalayan Times.

“According to those who met us today there are around 400 Chinese who have been stranded here due to the lockdown and are staying in different locations inside the Valley,” Baniya said.

According to The Himalayan Times, the Chinese nationals informed NTB that they are running out of money and the embassy has requested them to stay in self-isolation at hotels that they are staying in currently.

Amid Of Surge Of COVID-19 Cases, Nepal Issues More Permit For Everest Expedition By Agencies 2 weeks, 3 days ago

Nepal Caps Number Of Climbers On Everest By Agencies 2 weeks, 4 days ago

RAHUL CHAUDHARY Hospitable For Hotels By A Correspondent 2 weeks, 6 days ago

Tourism Income Declines By 91.7 Percent In the Last Eight Months By Agencies 3 weeks, 2 days ago