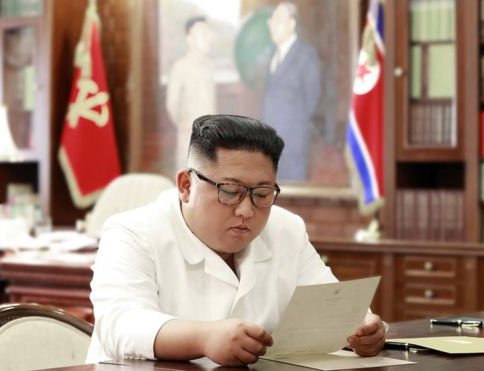 Despite intensifying speculation outside the country about leader Kim Jong-un’s health, North Korea’s state media have continued their routine coverage of Kim, this time saying he thanked workers in the elite tourism area where he is believed to be staying reports Korean Herald.

The North’s official Rodong Sinmun reported on Monday that Kim had sent a message of gratitude to workers building a tourist zone in the Wonsan-Kalma region on the east coast, without indicating when or offering other details. Over the past two weeks, since Kim has been missing from the public view, the North’s state media outlets have published several reports on Kim. But they were mostly about him sending diplomatic letters, expressing thanks to citizens and issuing other undated statements, without accompanying photos of the leader.

Conjecture about Kim’s health arose when he skipped an annual event at the Kumsusan Palace of the Sun on April 15 to commemorate the birth of the North’s founding father, Kim’s late grandfather Kim Il-sung. On Saturday, Kim missed another national holiday, North Korea’s Military Foundation Day, further fueling speculation about his health.

Kim was last seen April 11 in Pyongyang, when he presided over a Politburo meeting of the ruling Workers’ Party.

The 36-year-old leader’s unusual absence at one of the country’s most important events led to multiple reports suggesting Kim was in “grave danger” after botched cardiovascular surgery earlier this month. Some even said he was dead or in a vegetative state.

South Korea has continued to downplay reports that Kim is critically ill. Seoul’s Unification Ministry on Monday reiterated the National Security Council’s confirmation that “no unusual signs have been identified in North Korea.”

“Our government position is firm,” Moon Chung-in, the top foreign policy adviser to the president, told CNN. “Kim Jong-un is alive and well. He has been staying in the Wonsan area since April 13. No suspicious movements have so far been detected.”

“The government has enough information-gathering capabilities to say confidently that there is nothing unusual,” said Unification Minister Kim Yeon-chul during a forum on Sunday. On the topic of how the information was collected and evaluated, he said this could not be disclosed due to the nature of the information.

This, however, is not the first time Kim has been out of the public eye. In 2014, he was absent for about six weeks from state media reports, leading North Korea watchers to believe he had severe health problems. Later, he reappeared with a cane, with South Korea’s National Intelligence Service saying he had had a cyst removed from his ankle.

Speculation about North Korea is difficult to verify from the outside due to tight controls on information. But this time, the unconfirmed coverage is gaining traction once again because Kim has serious health problems and a long family history of heart issues.

Kim, said to be a heavy smoker, appears to have put on weight rapidly since he assumed power in 2011 and is also believed to suffer from high blood pressure and diabetes.

Both Kim’s father and grandfather died of heart attacks, in 2011 and 1994, respectively.

Delta Variant As Contagious As Chickenpox, May Cause More Severe Infection: Report By Agencies 3 days, 3 hours ago

England To Lift COVID Restrictions As Cases Rise By Agencies 2 weeks, 1 day ago