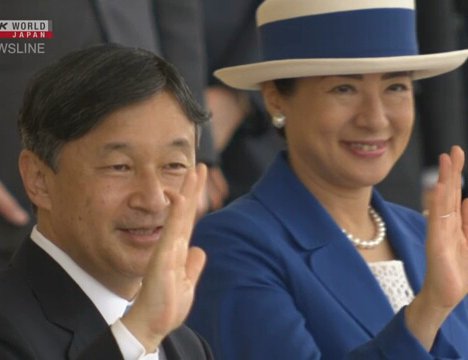 Friday marks one year since Japan's Emperor Naruhito ascended the throne. He has taken part in a number of ceremonies related to his accession over the past 12 months.

The Emperor proclaimed his accession in an enthronement ceremony in October during which he pledged to fulfill his responsibility as the symbol of the State while turning his thoughts to the people and standing by them reports NHK.

According to NHK, over the past year, the Emperor, along with Empress Masako, visited three prefectures for annual events formerly attended by Emperor Emeritus Akihito and Empress Emerita Michiko.

Late last year, the Emperor and Empress also traveled to the northeastern prefectures of Miyagi and Fukushima where they spoke to people affected by Typhoon Hagibis, the deadly storm that devastated parts of the country in October.

But the couple have drastically scaled back their activities this year due to the coronavirus pandemic. A planned visit to the United Kingdom has been postponed.

The Emperor has received briefings from experts in various fields about the effects of the outbreak on people's lives. He also met with the vice chair of the government's panel of infectious disease experts on April 10 to learn more about the situation.

The Emperor says he hopes people will work together to contain the virus and overcome the current predicament.