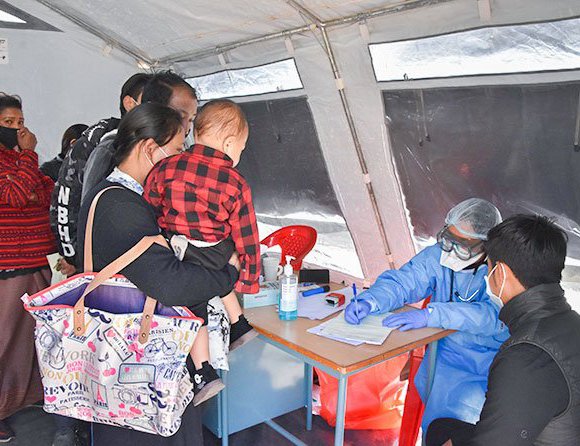 A total of 9,964 tests were conducted in Bhutan as of Thursday (April 30) reports Kuensel online. Bhutanese media Kuensel says as a part of the containment efforts, the health ministry continues to screen anyone entering the country both via land and air.

So far, over 2.4M people, including foreigners, at the point of entries (border gates) and 13,924 people at the Paro international airport were screened for the disease. Meanwhile, of the seven positive cases detected in the country, there are only two active cases as of today.

Bhutan has so far spent more than Nu 15.5 million (M) on testing for the novel coronavirus.

With over 100 tests per day, Bhutan has one of the highest Covid-19 testing rates (test per million) in the world today.

Officials from the health ministry said that testing is the most important component of the country’s containment efforts. “In the context of Covid-19, testing, is like the seed of the overall national response system to the pandemic,” said an official.

He said that based on the tests conducted, interventions including contact tracing, quarantine and isolation can be executed.

Irrespective of symptoms, all those completing the 21-day mandatory quarantine period are tested (RDT) on the 22nd day. Symptomatic people at the point of entries and flu clinics are also tested using the rapid test kits.

Health workers, DeSuup and soldiers among others, working in the frontline are also tested using the RDT method.

The confirmatory test, RT-PCR, is conducted mainly for five different groups of suspects. Swab samples from the throat of symptomatic people in quarantine including the primary contacts of the confirmed Covid-19 cases are collected for PCR test.

Ministry officials said the proportionately large number of people screened at the border gates could be anyone entering through the border checkpoints. After the border lockdown on March 22, people with permits to enter are screened.

Similar screening is also conducted for airline crews, ground and other operational staff at the airport.

In addition, 36,817 people have also been screened at 54 flu clinics across the country. Save for the flu clinics at the national referral hospital, Mongar, Wangdue and Trashigang, which remain open 24/7, rest of the clinics operate between 9am till 3pm.

Bhutanese Monk Decided To Bar Visitors From Religious Dance Due To COVID-19 By NEW SPOTLIGHT ONLINE 4 weeks, 1 day ago