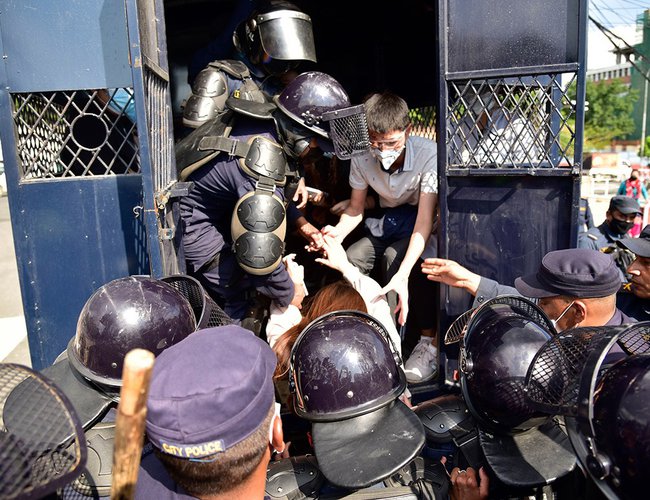 Police Arrested dozens of Chinese nationals who started a sit-in protest and tried to enter the restricted zone at Singha Durbar. There were a clash between the Chinese citizens and the police.

Shyam Lal Gyawali, Senior Superintendent of Police (SSP) at Metropolitan Police Range, Teku said that the police have detained 47 Chinese nationals for gathering in the prohibited zone at Singha Durbar, the main administrative hub of the government.

They had staged a sit-in protest on Friday demanding an arrangement for them to return to their country.

When the police intervened the illegal assembling of people, the protesters pelted stones over the police, said SSP Gyawali. The Chinese nationals (tourists) also displayed placards with 'No money, need to go home' written in both English and Chinese script.

Gyawali said that four security personnel and two Chinese protesters were injured in the clash.

The injured persons were treated at Trauma Centre, Kathmandu. The Chinese nationals were taken to Nepal Police Club, Bhrikutimandap for their detention.

Meanwhile, SSP and spokesperson at Metropolitan Police Office, Ranipokhari, Kiran Bajracharya said that the Chinese nationals had first reached the Chinese Embassy in Baluwatar to protest.

As the police sent them back, they gathered in front of Nepal Tourism Board and started marching towards Singha Durbar via Bhadrakali, added Bajracharya.

They were demanding safe passage to their homeland upon the initiation of their own government.

India Hands Over 150 ICU Beds To Nepal As Part Of COVID-19 Cooperation By NEW SPOTLIGHT ONLINE 6 days, 1 hour ago