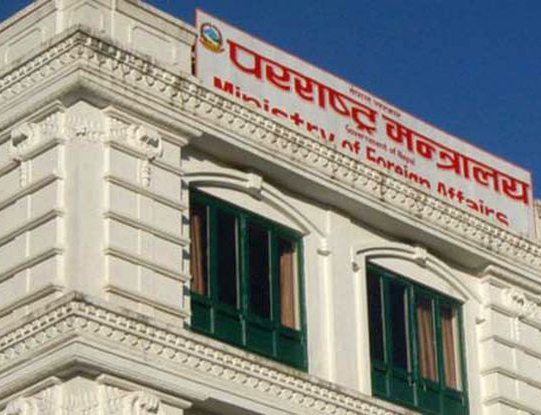 According to Ministry of Foreign Affairs Foreign Minister Pradeep Kumar Gyawali conveyed Government of Nepal's position on boundary issues to Ambassador of India to Nepal. Vinay Mohan Kwatra at a meeting held at MoFA today and handed over a diplomatic note in this regard.

The Nepal government sent the diplomatic note with an initiative to resolve the ongoing border issue regarding construction and so called inauguration of ‘Link Road’ in Lipu Lekh passing through Nepali territory.

The Nepal government is also looking forward to a high-level initiative to resolve the ongoing border dispute with India.

On Saturday, the Ministry of Foreign Affairs (MoFA) had expressed its concern over the inauguration of a link road via Lipulekh region, which falls on the Nepali territory.

MoFA in its statement had said that the Government of Nepal has consistently maintained that as per Sugauli Treaty (1816), all the territories east of Kali (Mahakali) River, including Limpiyadhura, Kalapani and Lipu Lekh, belong to Nepal. This was reiterated by the Government of Nepal several times in the past and most recently through a diplomatic note addressed to the Government of India dated November 20, 2019, in response to the new political map issued by the latter.

The Indian Government, in response, had claimed that the recently inaugurated road section in Pithoragarh district in the Indian state of Uttarakhand lies completely within the territory of India and that the road follows the pre-existing route used by pilgrims of the Kailash Mansarovar Yatra.

WHO Forms New Group To Study Covid Origin By Agencies 6 days, 10 hours ago