Bangladesh Extends Curbs On Movement From May 17 To 28

Bangladesh extends shutdown till May 30; no jamaat at Eidgah; ongoing namaz guideline to be in force 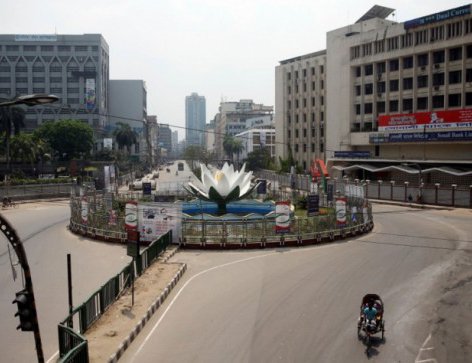 The government has once again extended the ongoing shutdown of public and private offices till May 30 in an attempt to prevent further spread of the coronavirus Reports The Daily Star.More

All public transport will remain suspended during this period.The cabinet division yesterday issued a circular in this regard. The announcement came two days before the ongoing shutdown ends on May 16.

The extended shutdown will coincide with the holidays of the Eid-ul-Fitr which is likely to be celebrated on May 24 or 25.

According to the circular, movement of people will be restricted from May 17 to May 28.

Local administrations along with the law enforcers will control the movement so that people cannot move from one district to another or one upazila to another, according to the gazette.

People must stay at home during the period as the country is witnessing a growing number of deaths and coronavirus cases, the circular read, adding that people will not be allowed to come out of their houses between 8:00pm and 6:00am.

All essential services and vehicles carrying goods, however, will remain outside the purview of the circular.

Pharmaceuticals and other export-oriented industries would be allowed to continue operation with necessary health safety measures taken by the authorities.

It is the sixth extension of the shutdown that was enforced on March 26 to check the spread of the deadly virus.

Most of the public and private offices have been shut since then. Some government offices involved in providing emergency services have been kept open on a limited scale.

No Eid Jamaat At Eidgah

Meanwhile, the religious affairs ministry yesterday issued an urgent notice saying there would be no Eid jamaat at Eidgah or open grounds on the Eid-ul-Fitr due to the Covid-19 pandemic.

It asked people to offer Eid prayers at nearby mosques, following special instructions.

In the notice, the ministry listed at least 13 instructions for people and the mosque authorities to follow during Eid prayers.

According to the instructions, there will be no carpets in the mosques during prayers, entire mosques should be disinfected before prayers, and everyone will have to bring their own prayer mats (jainamaz).

There should be soap or hand sanitiser at the entrance of every mosque; people will have to maintain distance and follow health guidelines during offering prayers, the instructions added.