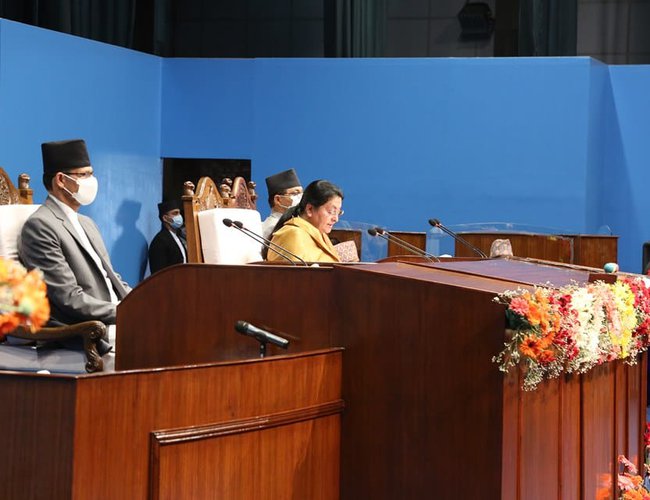 The government announces that the territory encroached by India in Kalapani, Lipulek and Limpiyadhura region will be reincorporated in Nepal within the coming fiscal year.

Announcing its annual policy and program, the government declares that encroached land will be taken back through the diplomatic initiative.

Following the inaugural of the road to Mansarovar through Limpuiyadhura, Nepal has officially protested the move.

President Bidya Devi Bhandari said that the Labor Information Bank would be established to collect the information about Nepali laborers who have returned from abroad and to provide job opportunities to them.

Unveiling the policy and program of Fiscal Year 2020/21, she said that the Labor Information Bank will coordinate the unemployed youths of the nation with employers, she said.

President said that the initial capital of the bank would be managed on the basis of skills and competencies of the Nepali youths, said the President.

The government would stress on providing practical knowledge to attract youths in science and technology, said the President.

She added that employment opportunities on a bigger scale would be created in the agricultural sector.

"The government has invested a huge amount in agriculture in the past and it would continue to do the same," she said.

The industries closed for various reasons would be brought into operation even with support from the private sector with due process, according to the policy and programs.

Reading the government policy and programs, she said that the Hetauda Garments Factory, Butwal Thread Factory, Gorakhkhali Rubber Industry and some other industries, which are closed for long in the country, would be operated. The government has planned to develop and expand the industries for the production and processing of agricultural and forest-based products.

Furthermore, the policy and programs have prioritized the development of industries that use raw materials from within the country. Stating that industrial villages were established in 45 local levels across the country in the current fiscal year, the plans to open industrial villages in other local levels would be forwarded in the upcoming fiscal year.