Delhi With Support From A Section In Nepal Working To Dislodge Me: Prime Minister Oli

Delhi With Support From A Section In Nepal Working To Dislodge Me: Prime Minister Oli 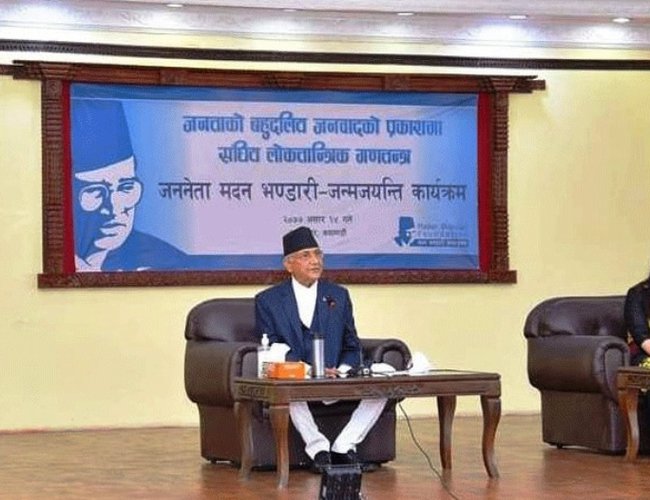 Prime Minister KP Sharma Oli said that forces in Delhi and Nepal have been trying to remove him from prime minister because of his decision to print the new map incorporating Nepal’s territory.

Addressing a program organized on the occasion of the 69th birth anniversary of leader Madan Bhandari, Prime Minister Oli said that recent media coverage in Indian media and activities in the hotels and activities of Embassy indicated that the move is on to remove him from Prime Ministers.

“Listen to Indian Media. Look at the activities here in hotels. Even the and activities of Embassy indicated the move to unseat me,” said PM Oli. "We've not the weak nationality that the government changes when it releases the new map of the country by incorporating encroached lands,” said Oli.

"Nepal's nationality has been strengthened now. I'm working not only for the present but also for the future. If I step down, none will be able to speak ardently for nationality," he claimed, hoping that the NCP and NCP parliamentary party guided by leader Bhandari's thoughts know it very well.

According to the PM, the revised map of Nepal was printed not as an error. "We don't backtrack from it. We take back our land at any cost. The land belonged to us for 204 years. But, it was encroached upon for 58 years. Finally, truth prevails," he underscored.

PM Oli And Nepal Closer To Settle The Disputes By Agencies 1 day, 10 hours ago

JSP-N POLITICS On Verge Of Split By A Correspondent 3 days, 7 hours ago