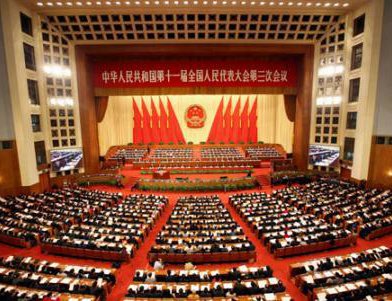 China's top legislative body has adopted a national security law for Hong Kong, marking a new phase in the territory's relationship to the mainland.

Hong Kong media say the law is likely to come into effect on Wednesday -- the 23rd anniversary of Hong Kong's handover to China from British rule.

It also allows Chinese authorities to set up an agency inside the semi-autonomous territory --- and enables the city's chief executive to choose judges that will oversee national security cases.

Pro-democracy groups and foreign governments have voiced concern the law undermines the "one country, two systems" framework --- which guarantees Hong Kong a high degree of autonomy and judicial independence.

The law was passed in two weeks after the first review of the draft --- prompting accusations the law is being pushed through ahead of local elections set for September.

Pro-democracy groups are planning a rally on Wednesday to mark the anniversary of the 1997 handover and show their opposition to the new legislation --- despite the police banning the event due to coronavirus restrictions.

The South China Morning Post, citing "police insiders," says about 4000 officers will be on stand-by to handle any unrest.