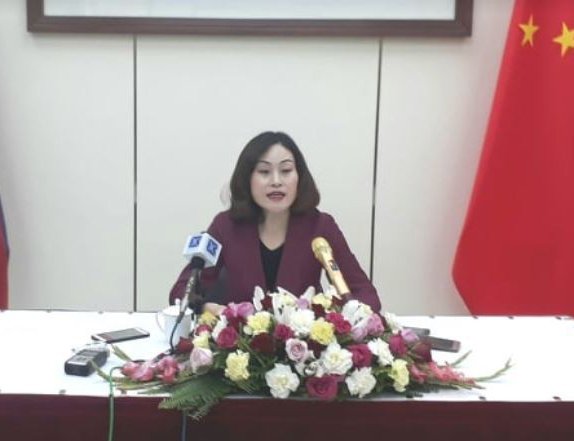 Chinese Ambassador to Nepal Hou Yanqi that any so-called “Nepal at the behest of China” accusation is baseless and comes with ulterior motives.

Ambassador Hou, in her interview with The Rising Nepal, has reiterated that the Chinese side has always respected for sovereignty and territorial integrity of the Nepali side.

“The issue of Kalapani involves Nepal and India. We hope the two countries will resolve their differences properly through friendly consultations and refrain from taking any unilateral action that may complicate the situation. China's position on this issue has not changed,” said ambassador Hou.

“Such accusations are not only insult to the will of the independent country of Nepal and the consensus of the Nepali people, but also are endeavours directed at disruption of China-Nepal relations,” said Indian ambassador to Nepal in her interview with the Rising Nepal.

“Firstly, I’d like to reiterate that the Chinese side has always respected for sovereignty and territorial integrity of the Nepali side. The issue of Kalapani involves Nepal and India. We hope the two countries will resolve their differences properly through friendly consultations and refrain from taking any unilateral action that may complicate the situation. China's position on this issue has not changed,” said ambassador Hou.

‘I’ve noticed that some irresponsible media and individual groups are always trying to create confusion between right and wrong and divert public attention to China. China and Nepal have already signed the Boundary Treaty in 1961 and the boundary has been delimited and demarcated without any dispute,” said ambassador Hou in her interview.

Over the years, the two sides have a good cooperation in matters such as boundary and dry ports affairs. During the visit of Chinese President Xi Jinping to Nepal last year, the two sides signed the Agreement on the Boundary Management System. Both sides are strengthening cooperation on boundary affairs to avoid interference from outside and promote common development. I have also noticed the statement issued by the Foreign Ministry of Nepal on June 25th and it has been made clear that the relevant reporting is totally baseless.

“All the parties and people in Nepal support the government for updating political and administrative map. This is the measure by Nepali government to firmly safeguard sovereignty and territorial integrity, and comply with the public opinion.”

Nepal and China are close friends for ages. They have been maintaining cordial relations since the establishment of diplomatic relations between the two countries in 1955. With the signing of historic Transport and Transit Agreement in 2016 that transformed Nepal’s status of a land-locked country to a land-linked one, the bilateral relations have gained newer heights.

“Looking back at the last 65 years, we have always been good partners in the same boat, and always helped when the other one faces difficulties. When Wenchuan in China was hit by earthquake in 2008, the Nepali government and people tried their best to support us. When Nepal suffered from the devastating earthquake in 2015, China launched large-scale rescue activities promptly and participated actively in post-disaster reconstruction. Up to now, among the 25 China aided post-earthquake reconstruction projects, 12 projects including the first phase of Kathmandu Ring Road Improvement Project and Kathmandu Durbar High School Reconstruction Project have already finished, while other projects are progressing in a steady and organized manner,” said ambassador.

“I would like to say that true gold does not fear fire. The friendship between China and Nepal is true gold and has withstood the tests of time and the changing situations. No matter how hard the situation is, China will always stand with Nepal and face the difficulties together. I believe that with the efforts of the governments and cooperation between our two countries, we will definitely win the final victory against the pandemic. I’m looking forward to that day to come soon!,” said ambassador.

107 Days Remains To Hold The Elections: CEC Thapaliya By Agencies 3 days, 1 hour ago

'China Appreciates Nepal's Commitment To One China Principle By Agencies 4 days, 14 hours ago