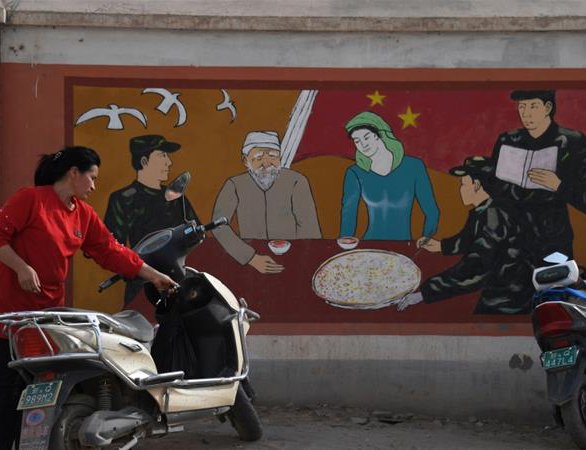 Report called strongest evidence yet that China's policies in Xinjiang met one of the genocide criteria of the UN.

Pompeo highlighted a report about the situation in China's Xinjiang region by German researcher Adrian Zenz published by the Washington-based Jamestown Foundation think-tank.

Pompeo, a persistent critic of China, including its treatment of Muslims in Xinjiang, said in a statement that the findings were consistent with decades of Chinese Communist Party practices "that demonstrate an utter disregard for the sanctity of human life and basic human dignity".

"We call on the Chinese Communist Party to immediately end these horrific practices and ask all nations to join the United States in demanding an end to these dehumanizing abuses."

An ethnic Uighur woman carrying her baby walks out of a restaurant in Urumqi city, Xinjiang Uighur Autonomous Province, China. China is accused of using forced sterilisation and forced abortions against minority Muslims in the region [File: How Hwee Young/EPA]

In his report, Zenz said his findings represented the strongest evidence yet that Beijing's policies in Xinjiang met one of the genocide criteria cited in the UN Convention on the Prevention and Punishment of the Crime of Genocide, namely "imposing measures intended to prevent births within the group".

Zenz said analysis of Chinese government documents showed natural population growth in Xinjiang had fallen "dramatically". He said that, in its two largest Uighur Muslim prefectures, growth rates fell by 84 percent between 2015 and 2018 and further in 2019.

The Chinese embassy in Washington referred to a statement by Foreign Ministry spokesman Zhao Lijian, saying that "some institutions are bent on cooking up disinformation on Xinjiang-related issues ... Their allegations are simply groundless and false."

Documents from 2019 revealed plans for a campaign of mass female sterilisation targeting 14 percent and 34 percent of all married women of childbearing age in two Uighur counties, Zenz wrote. The campaign, he said, likely aimed to sterilise rural minority women with three or more children, as well as some with two children - equivalent to at least 20 percent of all women of childbearing age.

"Budget figures indicate that this project had sufficient funding for performing hundreds of thousands of tubal ligation sterilization procedures in 2019 and 2020," he wrote.

Zenz said that, by 2019, Xinjiang planned to subject at least 80 percent of women of childbearing age in its four southern minority prefectures to intrusive birth prevention surgeries - placement of intrauterine devices or sterilisations.

He said in 2018, 80 percent of all new IUD placements in China were performed in Xinjiang, while only 1.8 percent of the population lives there. 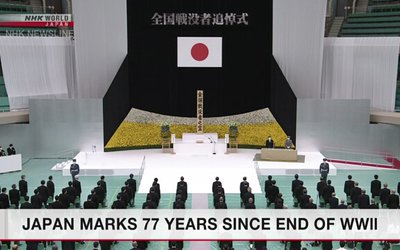 Japan Marks 77 Years Since End Of WWll By Agencies 1 day, 23 hours ago

Pro-Russian Official Of Southern And Eastern Ukraine Calls For A Referendum On September 11 By Agencies 4 days, 23 hours ago 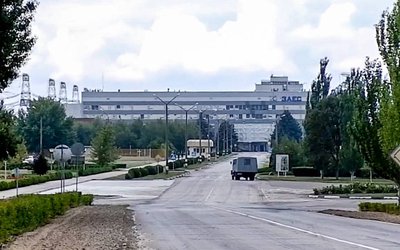 G7 Ministers call On Russia To Hand Over Zaporozhye Nuclear Power Plant To Ukraine By Agencies 5 days, 23 hours ago

Blasts Hit Russian Air Base In Annexed Crimea By Agencies 6 days, 23 hours ago