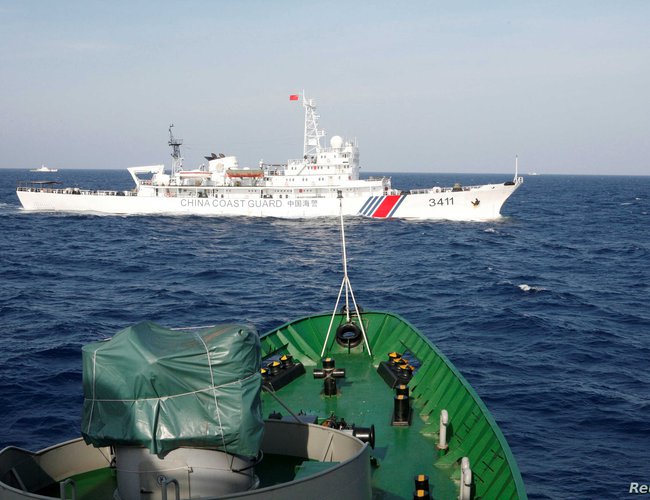 Less than a week after China sent a survey vessel into Vietnamese waters, vessel-tracking software shows that the China Coast Guard has shown up at Vanguard Bank, a known South China Sea flashpoint between Vietnam and China.

The coastguard ship came within 30 nautical miles of a Vietnamese oil rig, and its sudden arrival may be related to energy exploration Vietnam is planning to undertake in the area. Its presence risks a repeat of a prolonged standoff between the two Asian powers that played out in this disputed, southern section of the South China Sea in the second half of last year.

The China Coast Guard (CCG) ship 5402 left the port of Sanya, located in China’s Hainan province, on July 1. It stopped at Subi Reef, one of China’s largest artificial islands in the Spratly Islands, on July 2. It subsequently sailed north of Vanguard Bank, within 200 nautical miles of Vietnam’s coast, on July 4, and is currently patrolling right on top of the bank, which is a completely submerged feature. 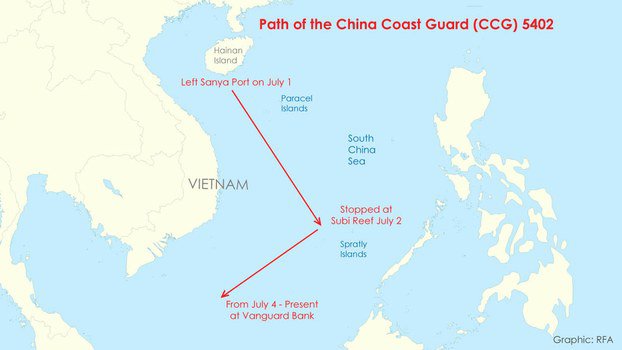 Andrew Scobell, a senior political scientist for the U.S.-based RAND Corporation and a professor at Marine Corps University, said this was likely another episode in China’s long-running campaign to pressure other claimants in the South China Sea, without risking full-blown conflict.

“Many Chinese Coast Guard vessels are a lot bigger than many of the ships in most Southeast Asian navies. They’re pretty damn intimidating, they do ram fishing boats, and they act like naval vessels,” he said in an interview.

“This is all about, from a Chinese perspective, promoting their interests in the South China Sea, strengthening their claims, using all instruments of national power, and at the same time avoiding escalation,” he continued.

The Vanguard Bank is disputed between Vietnam and China, and lies off Vietnam’s southern coast. In July 2019, a CCG contingent accompanied a Chinese survey vessel operating within Vietnam’s waters around the submerged feature, causing diplomatic outcry and a tense, months-long standoff between the Vietnamese and Chinese coastguards.

Prior to this new CCG deployment at Vanguard Bank, China sent a survey vessel, the Hai Yang Di Zhi 4, into Vietnam’s exclusive economic zone on June 30 – in a spot roughly 165 nautical miles northeast of where the CCG 5402 is now. That incursion prompted a response by a U.S. naval ship, the USS Gabrielle Giffords, and a Vietnamese coastguard vessel.

But by sending the CCG vessel into Vanguard Bank, China appears to be signaling its intent to keep challenging Vietnam’s control of the area. Although it is completely underwater, Vietnam has erected some outposts on top of Vanguard Bank, which lies within its continental shelf and exclusive economic zone.

China, however, claims it has “historic rights” to this and most other areas in the South China Sea, roughly demarcated by its so-called “nine-dash line” – a position unsupported under international law.

Vessel tracking software shows the 5402 on Monday came within less than 30 nautical miles of an oil rig Vietnam operates in the area as part of its energy exploration efforts. It is patrolling near block 06.01, a Vietnamese oil exploration block licensed to Russian oil company Rosneft. Vietnam’s planned exploration in that block prompted the standoff last year. 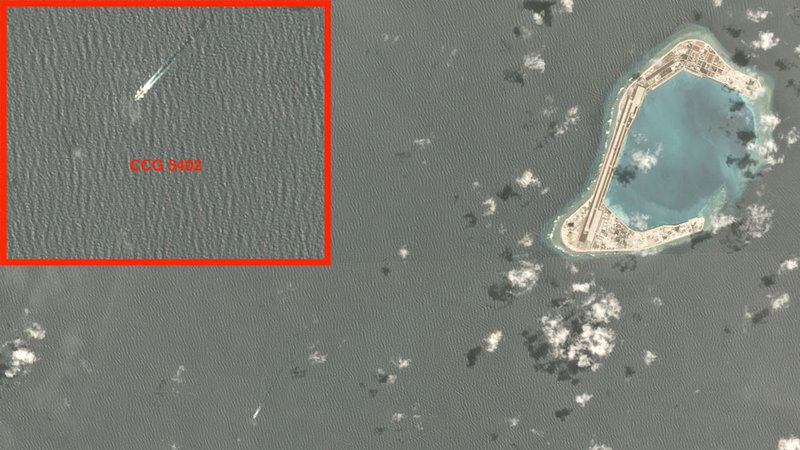 Satellite imagery shows a ship leaving Subi Reef, corresponding to the 5402’s location according to vessel tracking data, July 3, 2020. Credit: Planetlabs Inc.Vietnam’s government has yet to comment publicly on the presence of the 5402. Last week it criticized a Chinese military exercise further north near the Paracel Islands, which it also disputes with China, and stated survey vessels from other countries needed to seek permission before operating in Vietnamese waters – a reaction to the Hai Yang Di Zhi 4 incident.

China has always maintained that any energy exploration in the South China Sea must be done with Chinese partners, and not any other international companies. China has brought this position into so-called Code of Conduct (CoC) negotiations between it and the Association of Southeast Asian Nations (ASEAN), which Vietnam currently chairs.

The CoC is meant to govern behavior in the South China Sea between its claimants, and both China and ASEAN agreed to resume negotiations on July 2. However, provocative behavior from China has thrown the viability of those negotiations into doubt.

China’s sweeping territorial claims overlap with those of ASEAN members Brunei, Malaysia, the Philippines and Vietnam.

“They’re using provocations, pressure, strong-arm tactics, but then at the same time the Chinese are also offering carrots and appearing reasonable in publicly seeking a negotiated solution,” Scobell said, referring to the CoC. “It’s all part of a comprehensive approach to advancing China’s interests in the South China Sea.”