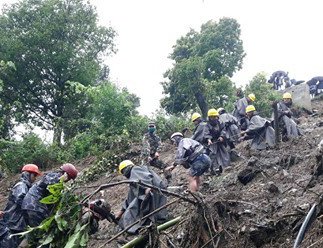 Landslide triggered by the heavy monsoon rain buried house killing seven people in Sarangkot of Pokhara Metropolitan City. Similarly, eight persons including other family members, relatives and neighbours were injured in the incident.

All of them had gathered at the house of Tanka Bahadur to celebrate the birthday of Pinky Thapa.

The deceased have been identified as Tanka Bahadur Thapa, 50, his wife Sommaya Thapa, 45, 11-year-old Ishika Thapa, six-year-old Suwan Thapa and right-year-old Shital Shrestha of Damauli, Tanahun, according to the District Police Office.

Traffic has been obstructed at different places due to landslide following incessant rainfall.