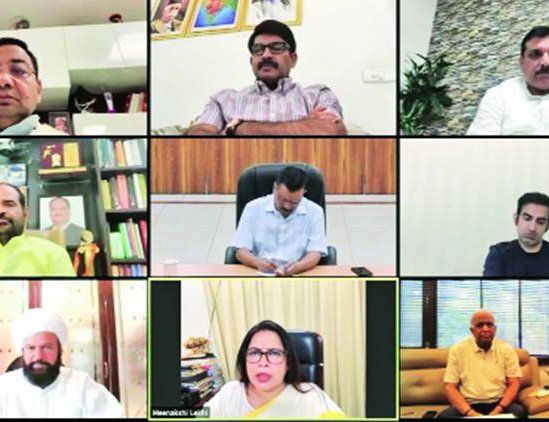 Delhi Chief Minister Arvind Kejriwal Thursday held a meeting with Lok Sabha and Rajya Sabha MPs on video conferencing to discuss the state’s fight against Covid-19. Earlier, the CM had convened a meeting with MLAs on the same issue.

The CM said that Delhi was in a much better position now than earlier and attributed it to the collective action taken in the Capital.

“The reason Delhi’s model of fighting coronavirus has been successful is that all parties and their members rose above their political affiliations and worked collectively. The foundation of the Delhi model is collectivity and teamwork. The central government, hotels, private hospitals, banquet halls, NGOs, religious and cultural organisations have come in support of the Delhi government,” he said. The number of cases in Delhi has dipped over the past three weeks after touching almost 4,000 cases on June 23.

India's capital, Delhi, has seen a sharp dip in coronavirus case numbers in recent weeks. Is one of the country's biggest hotspots actually close to flattening the curve? Aparna Alluri finds out more.

Two weeks ago, Delhi was scrambling to fight a pandemic that appeared to be spiralling out of control.

June had been a terrible month for the city - with record surges almost every day, it accounted for most of case load in the capital territory up to that point. Overrun labs and public hospitals added to the chaos and anxiety - as did conflicting information from the state and central governments.

By the end of the month, Delhi responded with a flurry of measures, from door-to-door health check-ups to increased testing, with the use of antigen tests, which are rapid but less reliable than the more widely-used RT-PCR tests.

Delhi's daily case count has been dropping sharply, even as testing remains consistent.

This week it has recorded 1,200 to 1,600 new cases a day - about half of its daily count in the last week of June, when it was reporting more than 3,000 new cases a day.While Maharashtra, the state with the highest case load, continues to see a rise, Tamil Nadu, also a major hotspot, is seeing a more gradual decline in daily case numbers.

Antigen tests are fast - they give results in minutes, unlike the RT-PCR test, which is longer, more complex and takes hours to generate a result.

The crucial difference between the two is that they look for different parts of the virus as evidence of infection. The antigen test looks for viral proteins whose presence is taken as proof of infection. But their absence does not mean the person is not infected. The RT-PCR test, on the other hand, looks for the RNA of the virus, which is a far more reliable indicator.

In fact, India's current testing guidelines require that anyone who tests negative for the virus must be retested with an RT-PCR kit.

Closed shops in Bangalore in Karnataka, which along with Tamil Nadu has a strict local lockdown

Maharashtra continues to see a rise in daily case numbers - its capital city, Mumbai, has started to register a gradual decline, but surrounding districts, such as Thane, and Pune and other cities in the state are seeing spikes.