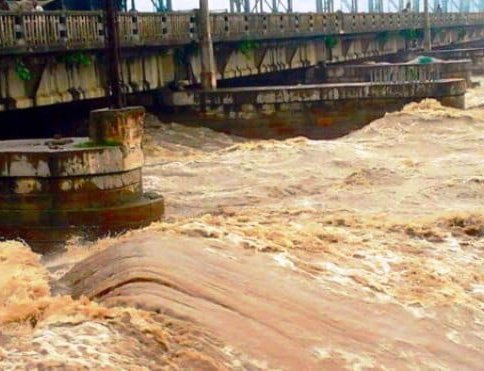 For the first time in a couple of years, the authorities flashed the red light and red flag at Kosi Barrage following the flood level crossed the dangerous mark reports The Rising Nepal.

If the water flow crosses 300,000 cusecs, the red light glows in the middle of the barrage with a red flag. The light informs the nearby locals of the water flow in the river.

According to the daily, the Koshi Barrage Control Room, which regularly monitors water in the river every hour, revealed that the water flow recorded at 12:30 pm on Tuesday was the highest of the year. As per the control room, the flow was 334,900 cusec.

In the rainy season of the past years, the control room of Saptakoshi had recorded 301,460 cusecs of water flow as the highest.

The increasing flow of water and the rise on the level have increased the risk leading the authorities to open 48 out of the 56 floodgates of Koshi Barrage.

“The increasing level of water in the river has increased the risk of flooding in the settlements nearby. As the red light has been flashed, the locals are being informed and relocated to safe places,” said Superintendent of Police Krishna Prasain, chief of Saptari District Police Office.

Government To Relocate 640 Houses Of Eight Settlement Of Sindhupalchwok By Agencies 4 months, 1 week ago