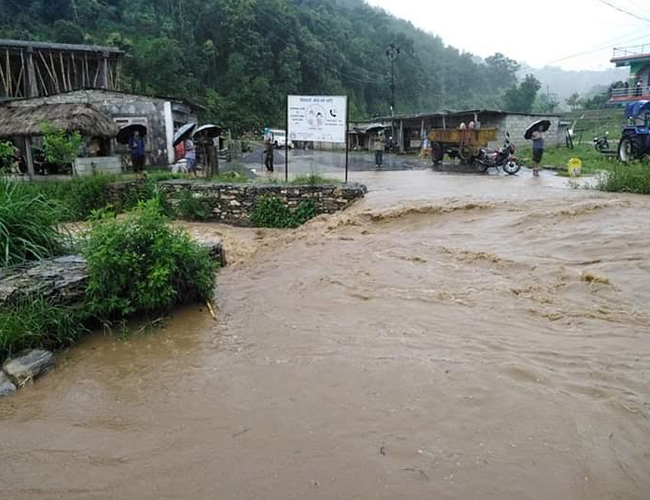 The mountainous terrain of Nepal and the catchment areas are going to rain heavily raising the damaging potential of the water bodies running across Indian states. Heavy rainfall is expected between 27th and 30th July over hills in Nepal.

Skymet issues an orange alert for Bihar, to be prepared and guard against such powerful thunderstorms to minimize loss of life and assets.

The monsoon trough is likely to shift close to the foothills of Bihar shortly. This situation is ideal for accentuating rainfall all along its stretch from Champaran to Kishanganj. Heavy rainfall is expected between 27th and 30th July over the northern half of Bihar comprising Champaran (West & East), Siwan, Sitamarhi, Madhepura, Madhubani, Darbhanga, Supaul, Araria, Bhagalpur, Purnea and Kishanganj. The rest of the Bihar state will experience moderate rains with few intense spells of short duration during this period.

Bihar is struggling with grim flood situations for the third time in this season since the onset of monsoon. Though heavy rains are not likely during the next three days, the steady flow of rivers and the release of water from the barrage is likely to keep the situation grim. The fear of escalation looms large with a northward shift of monsoon trough for nearly 4-5 days.

The thunderstorm cells during such situations are energetic and are filled with hazards of severe lightning strikes. The past incidents of this season have inflicted loss of life and carry the potential even this time also. Skymet issues an orange alert to be prepared and guard against such powerful thunderstorms to minimize loss of life and assets.