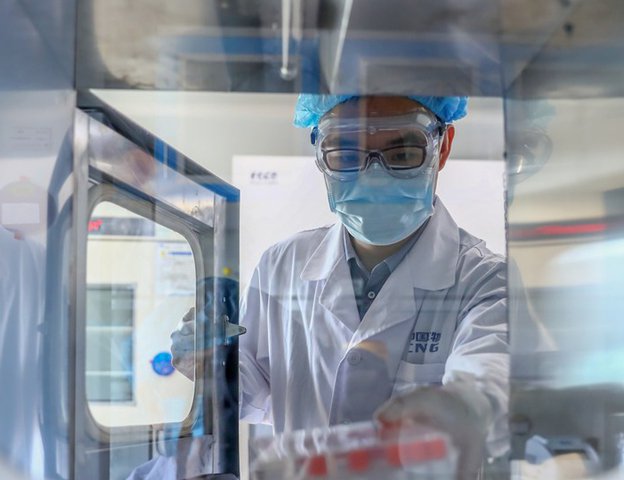 The battlefield of a global vaccine race has seemingly transferred from research and development to the market after Russia announced its approval of the world's first COVID-19 vaccine on Tuesday, soon after which the US announced to purchase another 100 million doses of a domestic candidate, revealing the Trump administration's anxiety over Russia's move.

Chinese experts predicted that the move will be a big leap indicating that humans are moving from research and development (R&D) on a COVID-19 vaccine to the market, which would encourage more nations to accelerate their pace while the COVID-19 pandemic has not yet been brought under control globally.

Currently in the vaccine race, China, the US, Russia and some European countries have been at a similar pace in the R&D of a COVID-19 vaccine in recent months, and China is likely to stand out after Russia, experts noted.

Confirmed COVID-19 cases have exceeded 20 million worldwide as of Wednesday, according to the World Health Organization (WHO). 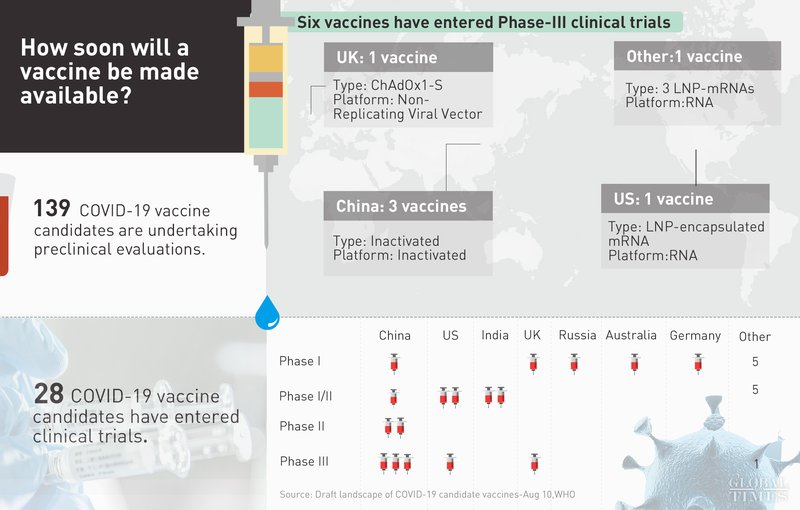 Following Russia's announcement on Tue that it has registered the world's 1st vaccine for COVID-19, how soon will a vaccine be made available? - 6 vaccines have entered Phase-III clinical trials, including 3 developed by China - 28 in clinical trials - 139 in preclinical stages

Along with the announcement of the approval, Russian officials also revealed on Tuesday that they had received orders from 20 countries for more than 1 billion doses and Russia is ready to manufacture 500 million doses of the vaccine, an adenovirus vector vaccine, per year in five countries, amid strong suspicion from some Western scientists and politicians over the vaccine as no experimental data has been released to prove its safety and efficacy.

Anthony Fauci, director of the National Institute of Allergy and Infectious Diseases of the US, said that he seriously doubts that Russia had "actually, definitively proven that the vaccine is safe and effective," ABC News reported Wednesday.

At a briefing on Wednesday morning, US Health and Human Services Secretary Alex Azar criticized the Russian vaccine for being "non-transparent" as the data from the initial trials in Russia have not been disclosed.

Russian officials previously told media that they were preparing experimental data of the vaccine and planned to release it for peer review in August. A Reuters report on Tuesday also indicated that super-fast approval could mean that potential adverse effects of a vaccine may not be picked up, citing a British drug researcher.

Chinese researchers admitted that it is hard to judge the safety and efficacy while there is no data available, but they noted that as the technology of developing and producing adenovirus vector is mature, it is very likely Russia will succeed, which, if taking place, will be huge encouragement for the world.

The vaccine approval procedure is similar in most countries, with a total of three-phase clinical trial results required before formal approval in order to maximize the effectiveness and safety of the vaccine, said Tao Lina, a Shanghai-based vaccine expert on Tuesday.

Russia's current fast-tracked development may be due to their strong concerns over a worsening epidemic in the coming winter. This may compromise the effectiveness of its vaccine, but its safety is still reliable although data on its phase-2 trials have not been released, according to Tao.

Russian President Vladimir Putin chairs a meeting with members of the government in a teleconference call at the Novo-Ogaryovo state residence outside Moscow, on Tuesday. Putin claims Russia has developed the first vaccine offering sustainable immunity against the novel coronavirus. Photo: AFP

The eventual success of the Russian-developed vaccine will be a huge boost to the world, representing a huge breakthrough for a vaccine against the novel coronavirus that hasn't been successfully marketed yet, Tao noted.

Analysts pointed out that apart from scientific concerns, the Western media's hyping of safety and efficacy issues regarding Russia's vaccine is more due to political reasoning and protection for their own domestic vaccine producers.

After Russia announced its approval on Tuesday, later the same day, US President Donald Trump announced the US government will purchase 100 million doses of Moderna's experimental coronavirus vaccine.

With the latest deal, the US government has reportedly spent $9.4 billion on ordering 700 million doses worth of COVID-19 vaccines with five companies, naming Moderna, GlaxoSmithKline and Sanofi, Pfizer, Novavax, Johnson & Johnson and AstraZeneca.

More countries will accelerate their procedures to develop and market their vaccine candidates, Chinese experts predicted, while warning of a blind competition, and emphasizing safety and efficacy.

Six COVID-19 vaccine candidates, including three from China - Sinovac, Wuhan's Institute of Biological Products/Sinopharm and Beijing's Institute of Biological Products/Sinopharm, have entered phase-3 trials, the WHO announced on Monday, while the other three are from the University of Oxford/AstraZeneca in the UK, Moderna/NIAID and BioNTech/Fosun Pharma/Pfizer both from the US.

In total, 168 vaccine candidates around the world have started some forms of trials, and 28 of them are in clinical trials, according to the WHO.

There is a higher possibility for China to stand out to be next in vaccine commercialization and the moment won't be too far away, said vaccine experts.

"Given the current progress of China's vaccine research, the country has basically been equipped with the conditions to commercialize the product since the phase-3 trial has to some extent marked the maturity of the technology," Yang Zhanqiu, deputy director of the pathogen biology department at Wuhan University, told the Global Times Wednesday.

"A Chinese-developed vaccine will probably enter the market by the year's end ahead of schedule," Tian Hongjian, a director with the China Medicinal Biotech Association, told the Global Times on Wednesday.

According to China's Ministry of Industry and Information Technology (MIIT), a total of 13 enterprises in China have launched construction of assembly lines to produce COVID-19 vaccines as of July 23, while nine Chinese enterprises have received regulatory approval to start clinical vaccine trials.

Despite understanding Russia's consideration of a short-cut for the approval of the vaccine, Chinese experts noted that it is unlikely Chinese companies would follow Russia's process as China has effectively put the domestic epidemic under control, allowing sufficient time to ensure safety and efficacy.

Our production facilities are prepared to wait for the last-phase clinical trial results and government approval before mass production, the Global Times learned on Wednesday from China National Biotec Group (CNBG), which announced earlier this month that an inactivated COVID-19 vaccine production workshop of its affiliated Beijing institute of biological products, the first and largest of its kind in the world, has passed national examination.

US drug maker Pfizer and its German partner BioNTech have also announced to eye marketing of their vaccine candidate by October.

Another candidate developed by US drug maker Moderna is also estimated to come into use by the end of this year with the yearly production estimated to reach 500 million doses and possibly 1 billion doses in 2021.

Competition on the COVID-19 market started long ago at the beginning of the R&D stage as any contribution to investment basically all come with distribution commitments attached.

Countries with low developing or economic capacities are also trying to ensure more provisions by engaging in the clinical trials.

In addition to its heavy investment in developing the COVID-19 vaccine, the Chinese government said in June that it will make a contribution of $20 million to GAVI's funding for the 2021-25 period.

For a future vaccine, experts said that Chinese-developed vaccines will be mainly purchased by Asian countries and some Latin American countries that depend on similar coronavirus genome sequencing or have been cooperating with China on vaccine R&D like Brazil and Mexico.

A poster reading "This summer I wear a mask when I go out" is seen in Clichy, next to Paris, France, Aug. 4, 2020. Amid signs of the epidemic resurgence, Paris is considering ordering people to wear masks in busy outdoor public spaces after the government authorized local authorities to toughen rule to contain coronavirus circulation during summer holidays. Parisians and visitors will have to wear a mask when they stroll along the banks of the Seine, visit the capital's open-air markets or main tourist spots. (Xinhua/Gao Jing)

Russia did not reveal the 20 countries which have ordered its vaccine, experts estimate that they may mostly comprise of Central Asian and Middle Eastern countries.

Candidates made in the US, UK and Germany, according to an AFP tally, have mostly been ordered by European countries, the US and Japan.

"For countries with their own ability in R&D and production, they are unlikely to purchase imports on a large scale given the vaccine's applicability locally," said Tian.

The demand for a COVID-19 vaccine among China's 1.4 billion population is forecast to reach 1.68 billion to 2.24 billion shots based on a vaccination rate of 60-80 percent and each person needs to have two shots, according to an industry report by Essence Securities.

Compared with the foreseeable handsome returns once the vaccine is put onto the market, previous investment is not that huge, according to Yang.

Assuming that the average purchase and storage price of the vaccine is 20 yuan ($2.88) per shot, then the domestic market space is 33.6-44.8 billion yuan, if calculated at a net interest rate of 50 percent, the corresponding profit margin is 16.8-22.4 billion yuan, said the report.

The space of Chinese-made vaccines in the overseas market is estimated to be within a profit margin of 5-7.5 billion yuan under the prediction that these vaccines would be mainly exported to low-income countries, according to the report.

Over 3.2 Million Die Due To COVID-19 Globally, 93 Million Recoveries By Agencies 21 hours, 43 minutes ago