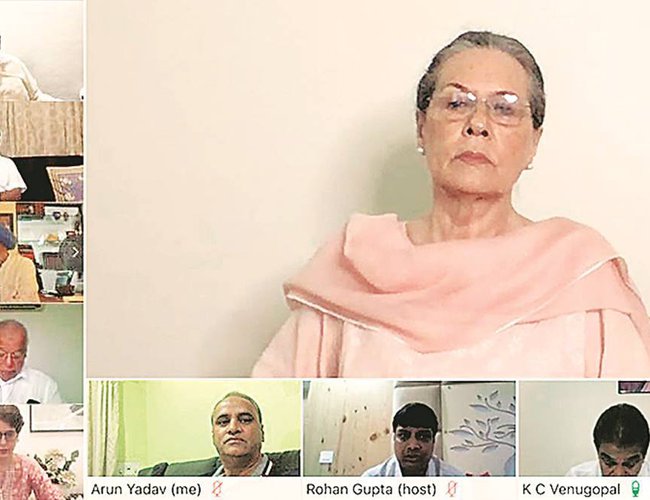 The CWC meeting, held via video conference has decided Sonia Gandhi will continue as interim party president for now, an AICC session is likely to be convened in the next four to six months to elect a new president.

AFTER the seven-hour-long stormy meeting of its Working Committee on Monday, the Congress acknowledged the letter sent to president Sonia Gandhi by 23 senior leaders calling for sweeping changes in the party but neither discussed its contents nor gave any specific commitments on the way forward.

Instead, most of those present at the meeting slammed the 23, questioned and criticized the intent and the timing of their letter even as they pledged loyalty to the Sonia-Rahul family and “resolved to strengthen their hands.”

Significantly, the resolution after the meeting said that the “two voices that have been at the forefront of exposing the government” are of Sonia and Rahul.

Came against the backdrop of Sonia’s tactical signal on Sunday that she was not keen to continue as the interim president, the meeting turned into a vote of confidence in Sonia’s leadership, and a reiteration of the party’s faith in the Nehru-Gandhi family.

After Sonia conveyed at the outset that she was unwilling to continue, many asked Rahul Gandhi to take over. Sonia’s letter asking the CWC to “begin deliberation” to start the process to find a full-time president was read out by AICC general secretary in-charge of organisation, K C Venugopal.

Sources said former Prime Minister Manmohan Singh and senior leader A K Antony were the first to ask Sonia to continue in the top post till a full-time president is elected. Antony, considered close to Sonia Gandhi, attacked the dissenters saying the letter was “cruel” in nature.

Among those present at the meeting were four of the 23 who signed the letter – Ghulam Nabi Azad, Anand Sharma, Mukul Wasnik and Jitin Prasada.

The meeting saw a well-choreographed attack against the signatories, said sources. Rahul is learnt to have taken the lead, as he questioned the timing of the letter, arguing that it was sent at a time when the party was fighting to save its government in Rajasthan and when his mother was in hospital. He also suggested that a structure needs to be put in place to assist the party president in handling the party’s affairs and functioning till a new president is elected.

The CWC unanimously requested Sonia to continue to lead the party “until such time as circumstances will permit an AICC session to be convened,” it said. Venugopal said the AICC session will he held at the earliest but did not give any time frame.

The CWC said both Sonia and Rahul have inspired a generation of Indians, within and outside the party, to demand answers from this government.

The resolution said the “CWC, reflecting the overwhelming view and desire of the rank and file of the Congress, unanimously resolved to strengthen the hands of Sonia Gandhi and Rahul Gandhi in every possible way. The CWC makes it clear that no one will be, or can be, permitted to undermine or weaken the party and its leadership at this juncture.”