Towards Enhanced Disaster Risk Reduction In The Koshi River Basin: A Look At The Downstream Reaches Of Bihar In India

Weather- and climate-related hazards are strongly influenced by seasonality. Cold waves cause numerous deaths in Bihar, while heat waves during the summer and monsoon seasons lead to higher morbidity and mortality. 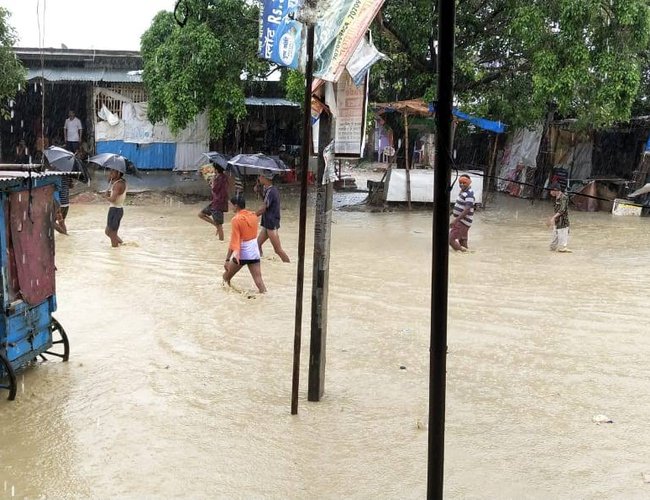 Rainfall patterns have changed in recent years, resulting in more high-intensity precipitation over shorter periods. Such trends are likely to contribute to an increase in the magnitude and frequency of water-induced disasters including landslides, debris flows, and floods in the Koshi basin, shared between China, India, and Nepal.

Communities in the basin live in a multi-hazard environment, where floods and droughts affect them annually. Women, children, and marginalized communities are most vulnerable to these changes as many lack decision-making power and access to information, and many have less capacity to prepare for disasters and deal with their aftermath. The downstream reaches of the basin, which cover the northern state of Bihar in eastern India, are particularly vulnerable.Link ICIMOD

Weather- and climate-related hazards are strongly influenced by seasonality. Cold waves cause numerous deaths in Bihar, while heat waves during the summer and monsoon seasons lead to higher morbidity and mortality. Thunderstorms that bring strong winds, intense rainfall, lightning, and hail contribute to widespread agricultural losses, infrastructural damage, and human and livestock deaths across the state. Further, an increase in flood disasters is likely to influence the prevalence and spread of water-related diseases and contaminate water sources, and lack of sufficient water during dry periods or in drought-prone areas affects hygiene and is likely to increase the risk of water-borne diseases.

The Koshi River is referenced by many as the “Sorrow of Bihar” since annual floods cause huge losses of life and property. Out of the state’s 38 districts, 28 are flood prone. These highly vulnerable districts faced major floods in 2007, 2008, 2011, 2013, 2016, and 2017, causing loss of life and property, including damage to crops, roads, and other infrastructure. A major flood in 2019 raged across 12 districts in 24 hours, affecting over 2.5 million people as the Koshi flowed above the danger level, breaching embankments and inundating dozens of villages.

Bihar’s vulnerability to floods is attributable to its flat topography, wide variations in the flow of Himalayan rivers, excessive rainfall levels, seasonal rainfall concentration (only during the monsoon months), and high sediment loads carried by the Koshi River. Thus, the floods in Bihar are very much influenced by the natural biophysical processes and socio-economic changes in upstream Nepal. The state is amongst India’s most flood-prone, with average annual rainfall measuring 1205 mm. Seventy percent of its area is categorized as flood-prone and thirty percent as prone to drought. Bihar may experience both floods and droughts in the same year, and sometimes in the same district. Along with neighbouring Uttar Pradesh, Bihar suffers droughts every five years on average. These hazards contribute to widespread crop losses and poverty. The state is also vulnerable to earthquakes, severe storms, heat waves, and wildfires. Between 2000 and 2014, Bihar experienced 23 flood events, 11 periods of extreme temperatures, and seven storms.

Moreover, changing and unpredictable precipitation patterns have serious costs for the entire region. The 2002 flood displaced 16.5 million people, destroyed some 400,000 homes and killed 400 people. The 2008 Koshi flood affected nearly 4.3 million people, with over 2 million evacuated across eight inundated districts. Over 500 people died, 19,000 livestock perished, and 223,000 houses were damaged throughout the basin in Bihar. For these reasons, there is a very clear need for disaster risk reduction (DRR) measures for the state.

At the national level, the Government of India has adopted mitigation and prevention as essential components of its development strategy in its tenth five year plan (2002–2007). However, although disaster management has been incorporated into development planning, many underlying problems in terms of application at the grassroots level remain. To make disaster management efforts sustainable, local communities must be equipped to handle disasters with help from state and other organizations.

A basin approach for reducing disaster risks in the downstream reaches

During a consultation, participants in Bihar expressed the need for a basin approach to reducing flood disaster risks. Such an approach would take into account upstream/downstream linkages, erosion and sedimentation, and climate change. Participants in the consultation notes that without understanding the river basin as a system, it would be futile manage the river in the downstream. The Koshi DRR Knowledge Hub (KDKH) has hence been established to facilitate increased collaboration between upstream and downstream communities, researchers, and practitioners.

Hosted by ICIMOD, the hub helps develop collaborative activities and projects that will improve decision making related to the management of the basin. These activities and projects are tailored to various risk contexts towards building a resilient basin. They comprise processes through which water neighbours India and Nepal can identify shared opportunities and challenges, and work together through mutual understanding and cooperation. One example of such upstream and downstream collaboration has been the sharing of flood early warning information by upstream communities from Nepal with downstream communities in Bihar through a Community Based Early Warning System (CBFEWS). Such flood early warning is reported to have saved 17 children swimming in the flash flood-prone Ratu River in 2017. Piloted by ICIMOD and its partners, information on CBFEWS has been widely shared during meetings and exposure visits to upstream reaches in Nepal organized and facilitated by the KDKH. From 2020 onwards, communities in two more flash flood-prone rivers – Khando and Gagan – have been connected with upstream Nepal to receive flood early warning. Such good practices can be shared widely and replicated across the basin. As is the case with CBFEWS, bringing key stakeholders from all walks of life together on a common platform such as the KDKH can provide the much needed push to secure the lives, livelihoods, and wellbeing of communities living along the Koshi on both sides of the border.

For the people of Bihar, floods are a reality they have to live with. Climate change-induced increase in intense rainfall has resulted in almost yearly flooding in North Bihar for the past decade, causing widespread economic losses, displacement, and distress.

Steps need to be taken at the community level alongside those taken by the state government to control the negative effects of flooding. Investing in climate change awareness and adaptation training, and scaling up flood preparedness and early warning systems are key to supporting DRR. Additionally, there is a need to invest in strengthening probabilistic forecasting for disasters like floods, landslides and droughts, along with timely transfer of this information to state, district and local governments. This information needs to be shared periodically with state and district authorities, allowing them to develop technical guidance and support tools for early warning systems, emergency response plans, and advisories on appropriate individual behaviour.