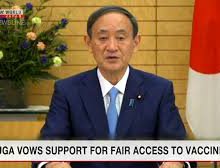 Japanese Prime Minister Suga Yoshihide has vowed full support for the effort to ensure fair access to coronavirus drugs and vaccines, including in developing countries.

He addressed the UN General Assembly via video.

In reference to the 75th anniversary of the founding of the United Nations, Suga said, "For the last 75 years, multilateralism has become stronger and made progress in the face of multiple challenges."

He said, "I call on all of you to unite in solidarity so we can turn the current crisis into an opportunity to reinforce our cooperation."

Suga said, "The spread of the coronavirus is a human security crisis, posing a threat to the lives, livelihoods and dignity of people across the globe. The guiding principle for us to overcome this crisis must be 'leave no one behind.'"

He said, "Japan fully supports the development of therapeutics, vaccines and diagnostics, and works towards ensuring fair and equitable access for all, including those in developing countries."

He said, "Japan also works with international organizations so that relevant international frameworks will be able to deliver results."

On the economy, Suga said, "Times of difficulty are in fact times of innovation." He said Japan, for its part, will work on digitalization as a matter of urgency.

On North Korea's abductions of Japanese nationals, Suga said the issue must be resolved as soon as possible because of the advancing age of the victims' families.

He also said that as the new Prime Minister of Japan, he is ready to meet with North Korean leader Kim Jong Un without any conditions.

Suga concluded his speech by referring to the postponed Tokyo Olympics and Paralympics. He said Japan is determined to host the Games in the summer of next year as proof that humanity has defeated the pandemic.

At Least 20 Demonstrators Killed In Myanmar By Agencies 1 year, 3 months ago

Japan To Tighten Restrictions On Arrival By Agencies 1 year, 6 months ago

Japan Grapples With Record-level Increase In COVID-19 Cases By Agencies 1 year, 6 months ago

Prince Akishino Proclaimed First In Line To Throne By Agencies 1 year, 7 months ago