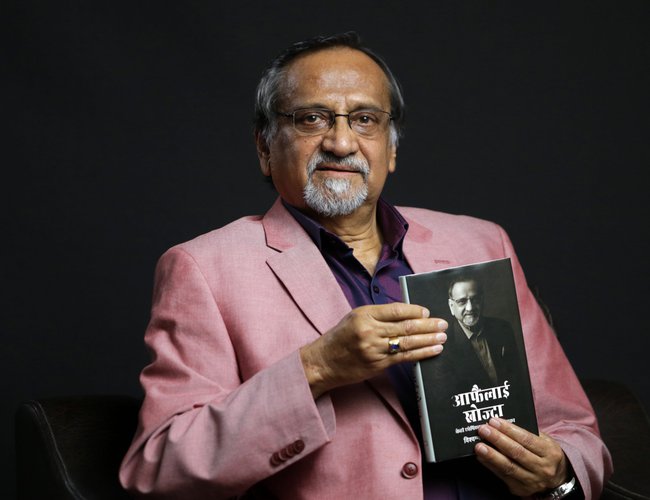 Bishwambher Pyakuryal is a well-known name with fame in Nepal. Having a diverse personality from professor of Tribhuwan University to a renowned lyricist Pyakuryal is known all over Nepal. Whether he was in teaching profession, lyricist, writer and consultant with high respect, Nepal’s renowned economist Pyakuryal individually simple, humble and cacheable to all.

As French philosopher Jean-Jacques Rousseau in his Confession, Pyakuryal too make his book Nepali version of confession. He narrates every single issue and event of his life in the book. BP Koirala in his Atmakatha and Daman Raj Tulahdar in his autobiography candidly presented the event of their life. Presenting honestly the events of life, Pyakuryal puts himself in the list of great authors.

Dedicating his time tirelessly for other issues, professor Pyakuryal this time came out with an autobiography telling about himself and his observation, collections and interactions in life.

Unveiled recently through a YouTube amid a COVID-19 pandemic, Dr. Pyakuryal’s book Aaphailai Khojda narrates his life, experiences, encounters and others of personal observation.

Spent over four decades teaching at the Central Department of Economics, Professor Pyakuryal shared his knowledge with hundreds of students, many of whom served high-level positions in the civil service and private sector.

Known for his higher knowledge of the economy and professional skill in the academic sector, professor Pyakuryal has also fame in the music sector writing number hit popular songs sung by renowned singers like Narayan Gopal.

Banker and chairperson of Star Hospital Kishore Maharjan said that I found Pyakuryal is a person with high analytical personality and frank person in my over three-decade-long banking sector experience. His autobiography will be very useful for all.

He said that Pyakuryal has presented his struggle and ups and downs in concisely in the book.

Similarly, senior artists, film producer and director Nir Shah said that man needs to give justice to the role he or she played during the life and maintaining the originality while mixing them. Bishwambherje has been able to keep it….

Shah said whether presenting himself as a country boy or urban student in politics, literature, or in love, marriage, or cook or consultant, during heavy heart or light heart, all these are connected in similar rope. Those elements have been made by he himself or his philosophy of life and these elements are not demolished yet. ‘When I searched myself, I find these truths as well as inspiration for life…..

Youth leader Ramkumari Jhankri in her comment said the book, which presented simply, help to understand the society, age and system of those days. She said that there are so many important things in the book for the younger generation to learn and read.

Author Pyakuryal said he narrates all ups and downs, hardships and pleasures happy and sad.

“I have presented all my experiences honestly and as it was taking an oath to write the truth. I went to prison during student days as an activist, I taught in school and I have taught a long period of time at Tribhuwan University,” said Pyakuryal.

“I have written poems, lyrics and stories. I spent my life close with musicians, singers and writers. I enjoyed myself with them. I might be productive and unproductive in my life. I went to the US for higher education and enhanced the quality of education. I made mistakes but I am always aware to correct my mistakes. I was rewarded for work and faced humiliation,” said Pyakuryal. My book is all about this.

Published by Fine Print, the book is now available in the market.

Korean INGO UHGHF To Buil A School In Dailekh By Agencies 16 hours, 29 minutes ago