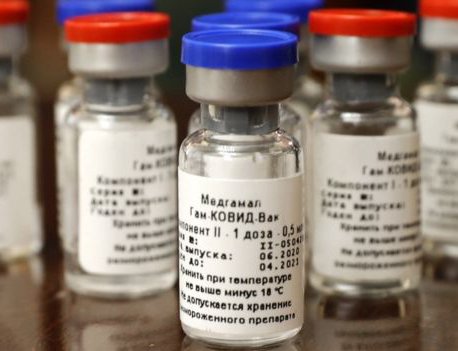 Moscow, September 2020–The Russian Direct Investment Fund (RDIF), Russia’s sovereign wealth fund, and one of the leading pharmaceutical distributors in Nepal, Trinity Pharmaceuticals, have agreed to supply to the country 25 million doses of the Sputnik V vaccine based on a well-studied human adenoviral vectors platform.Find the link

The agreement will enable 90% of the population of Nepal to get access to the Sputnik V vaccine and provide the country’s clinics with an anti-COVID vaccine with proven safety and efficacy.

The agreement underlines that many countries recognize the importance of having a vaccine based on a human adenoviral vector platform in the coronavirus vaccine portfolio. The human adenoviral vector platform is a well-researched vaccine platform that has been proven safe over decades including through 75 international scientific publications and in more than 250 clinical trials.

Clinical trials of the Russian vaccine have shown no serious adverse events, with Sputnik V generating a stable humoral and cellular immune response in 100% of participants. In contrast, vaccines based on novel platforms have yet to prove their safety and currently have no data on carcinogenicity or effects on fertility.

On August 11, the Sputnik V vaccine developed by the Gamaleya National Research Institute of Epidemiology and Microbiology was registered by the Ministry of Health of Russia and became the world’s first registered vaccine against COVID-19 based on the human adenoviral vectors platform. Detailed information on the Sputnik V vaccine, the technological platform of human adenoviral vectors, and other details are available at sputnikvaccine.com

On September 4, a research paper on the results of Phase I and Phase II clinical trials of the Sputnik V vaccine was published in The Lancet, one of the leading international medical journals, demonstrating no serious adverse effects and a stable immune response in 100% of participants. Post-registration clinical trials of the Sputnik V vaccine involving 40,000 volunteers are currently ongoing. More than 60,000 volunteers have applied to take part in post-registration trials. The first results of these trials are expected to be published in October-November 2020.

Kirill Dmitriev, CEO of the Russian Direct Investment Fund, said: “Thanks to an agreement with Trinity Pharmaceuticals about 90% of the population of Nepal will be provided with Sputnik V vaccine. Unlike experimental vaccines based on monkey adenovirus or mRNA, the Sputnik V vaccine was created on human adenoviral vectors platform, which has been studied over decades and has proven no negative effects in the long-term. We see a strong interest from other partners in Asia. In this regard, RDIF is ready to supply Sputnik V vaccine to the countries of the region as novel coronavirus infection is our common enemy which can be defeated only by joining our efforts”.

Kishor Adhikari, Director of Trinity Pharmaceuticals, said,“We are excited to announce our cooperation with the Russian Direct Investment Fund. Trinity is waiting for results of the final trial of Sputnik V. As soon as the vaccine is approved by the Government of Nepal we will make it available for the population of Nepal”.

Russian Direct Investment Fund (RDIF) is Russia's sovereign wealth fund established in 2011 to make equity co-investments, primarily in Russia, alongside reputable international financial and strategic investors. RDIF acts as a catalyst for direct investment in the Russian economy. RDIF’s management company is based in Moscow. Currently, RDIF has experience of the successful joint implementation of more than 80 projects with foreign partners totaling more than RUB1.9 tn and covering 95% of the regions of the Russian Federation. RDIF portfolio companies employ more than 800,000 people and generate revenues which equate to more than 6% of Russia’s GDP. RDIF has established joint strategic partnerships with leading international co-investors from more than 18 countries that total more than $40 bn. Further information can be found at www.rdif.ru

Trinity Pharmaceuticals is a healthcare company operating in pharmaceutical products, mainly human vaccines. It is serving the Nepal market with a wide range.