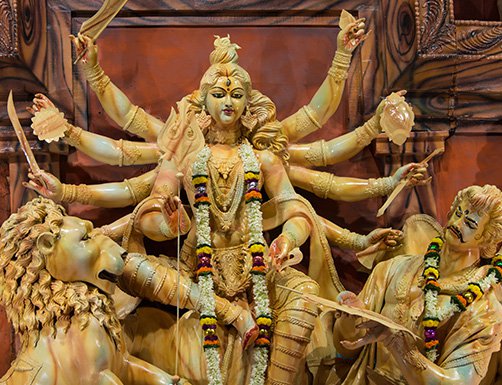 Dussehra is one of the most significant festivals in India. This festival is celebrated with full fervour and enthusiasm and it marks the end of the nine-day festival of the Navratri.

The festival Dashami or Dusshera gives the message of victory of good over evil. On this day, effigies of Ravana, Meghnad and Kumbhakaran are burnt, so as to represent the victory of good over bad. People depict the life and glory of the righteous Lord Rama through ballads and plays.

This time, due to the coronavirus pandemic the celebrations will be somewhat different compared to the previous years. Home Ministery has already issued guidelines such as face mask and 6-ft distance for a safer and happy Dussehra. It is also reported that any event in the contaminated zone is strictly prohibited.

This festival has several mythological stories. In some part of India, people celebrate Vijaya Dashami as the day when Goddess Durga killed demon Mahishasur and that signifies the victory of good over evil. This is the reason why nine avatars of Goddess Durga are worshipped on the Navaratri. It is also said that Goddess Durga immersed in water with the devotees who signifies the departure of Goddess Durga from the material world after maintaining Dharma.

The other mythological story of Dussehra is when Lord Ram killed Raavana. According to Hindu mythology, it is said that Ravana kidnapped Lord Rama's wife Sita. Lord Rama managed to shoot an arrow in the belly of Ravana and killed him. That is why the Dussehra festival is celebrated as a victory of good over evil.

This festival has a message that says that the good will always win over the evil and it is called the victory of good over evil. Dussehra is also considered as an auspicious day for starting new businesses or for making new investments.

It is believed that on the day of Dussehra or Vijayadashami, Lord Rama defeated King Ravana in his quest towards rescuing his wife Sita. This is also the day when Goddess Durga slayed the buffalo demon Mahisasura

Dussehra or Vijiayadashami is one of the most important autumnal festivals in India. It marks the end of the nine-day Navratri celebrations as well as the five day Durga Puja festivities. This year Dussehra has fallen on 25 October.

It is believed that on the day of Dussehra or Vijayadashami, Lord Rama defeated King Ravana in his quest towards rescuing his wife Sita. This is also the day when Goddess Durga slayed the buffalo demon Mahisasura.

The common theme that runs through both festivals is the triumph of good over evil. In many places in Northern India, effigies of Ravana are burnt to symbollically celebrate the demolition of eveil inside human beings and artists too take part in a play based on Tulsidas' Ramcharitmanas in the famed Ramlila.

While the word Dussehra comes from the two Sanskrit words dasha (symbolising the ten heads of Ravana) and hara, which means 'to defeat', burning the effigies of Ravana, Kumbhakarna and Meghnad is supposed to abolish the evil inside human beings.

In the eastern part of India where Vijayadashami will be celebrated the next day, it will be marked through sindur khela among married women and the immersion of Goddess Durga along with her children Lord Ganesha, Lord Kartikeya, Goddess Saraswati and Goddess Lakshmi. People wish each other Subho Bijoya following the immersion of the idol.

Kumar Shasti And Sithi Nakha 2022: The Birthday Of Kumar And Important Day For Newar Community By NEW SPOTLIGHT ONLINE 3 weeks, 3 days ago