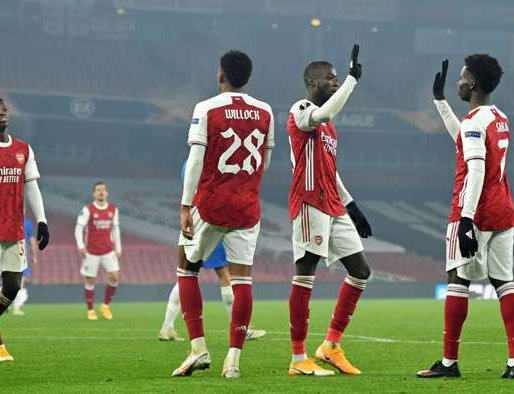 Molde took a surprise lead at Emirates Stadium, but Arsenal fought back to make it three Europa League wins from three.Goal

Joe Willock capped an impressive display with a late strike after two own goals helped Arsenal fight back to score a 4-1 win over Molde in the Europa League.

Martin Ellingsen's long-range strike gave the Norwegian champions a shock lead at Emirates Stadium on Thursday, but Kristoffer Haugen turned into his own net just before the break.

Substitute Sheriff Sinyan also scored at the wrong end before Nicolas Pepe drilled home, and Willock added a fourth late on as a much-changed Arsenal raised their game in the second half.

A third win out of three puts Mikel Arteta's team six three points clear of their opponents at the top of Group B and well on course to qualify for the knockout stages.

Martin Bjornbak was on hand to clear after Eddie Nketiah dinked an effort beyond Molde goalkeeper Andreas Linde early on, but Arsenal were lacklustre and they fell behind 22 minutes in.

Bernd Leno's casual kick was nodded to Magnus Wolff Eikrem, who picked out Ellingsen with an incisive first-time pass and the unmarked midfielder bent a clinical left-footed strike into the far corner from 25 yards.

Arsenal finally raised the tempo and Nketiah had a goal ruled out when it appeared to be Willock who was marginally offside, but the pair combined at the end of a brilliant rapid counter-attack just before half-time that resulted in Haugen putting the ball through his own net at full stretch.

Sead Kolasinac missed an open goal from close range early in the second half when Linde palmed a cross into his path, but two goals in the space of seven minutes put Arsenal in command.

Sinyan put through his own goal after the lively Willock played a one-two and knocked the ball across the six-yard box, before Pepe fired in first time from just inside the penalty area when Bukayo Saka picked him out.

Pepe then turned provider for Willock, who lashed home a deserved fourth clinically in the closing stage.

What does it mean? Gunners on a roll

That is three wins in a for now for Arteta's men and they look destined to advance from their group with ease.

Molde were well drilled in the first half as the Gunners lacked a spark, but the home side had that extra quality to turn it around in the second half.

With Leno and Willian the only two players staying in the starting line-up from the win at Manchester United last weekend, Arteta's decision to make nine changes did not backfire.

Willock has not made a Premier League appearance this season, but the midfielder caught the eye again in Europe, after he was on the scoresheet and provided an assist in a 3-0 win over Dundalk last week.

The 21-year-old was full of energy in the middle of the park and made some probing runs, setting up the third goal before drilling in a fourth that was richly deserved.

He only misplaced three of 41 passes, 28 of which were played in the Molde half. Willock also showed he can be a threat from wide areas, providing five crosses. His four tackles were also more than any other Arsenal player achieved.

It was not one of Kolasinac's better games for the London club and how he failed to score from inside the six-yard box in the second half he will never know. His final ball could also have been much better, with just one of his crosses finding the target.

Aston Villa will be Arsenal's next opponents in the Premier League at Emirates Stadium on Sunday, while Molde take on Kristiansund, also on Sunday.