Two Peas In A POD

Bihar and Nepal are like two peas in a pod, territories which were united by geography and divided by history, due to which the ethnicity, language, culture and cuisine in this region are inseparable and one might not even realise when one steps across the border. 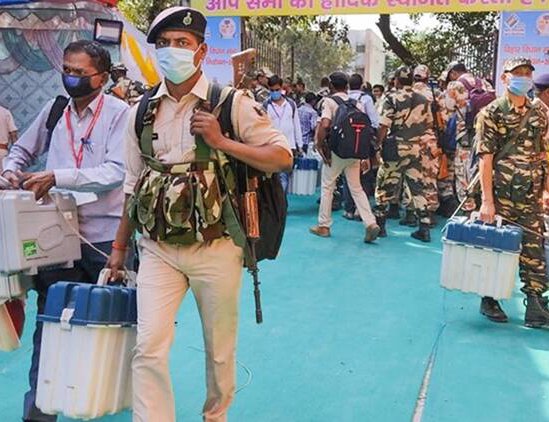 With the onset of election season around the world, two closely watched elections from Nepal would be the United States presidential elections and the Bihar Assembly elections. Although the impact of both the elections cannot be quantified on a purely political profit and loss basis, the qualitative impact of the above-mentioned elections is yet to be decoded.

Bihar and Nepal are like two peas in a pod, territories which were united by geography and divided by history, due to which the ethnicity, language, culture and cuisine in this region are inseparable and one might not even realise when one steps across the border. The regime in Bihar always has yielded some influence in Nepalese politics from the first Chief Minister S.K Sinha allowing the transport of ammunition through Bihar to Nepal in the war against the Ranas to the so-called influx of criminals in Nepal from Bihar during the maiden days of CM Nitish Kumar. The outcomes of these actions are for history to judge in the future.

With the conclusion of Bihar elections on the 7th of November 2020, I have tried to present a few instances of the past where a regime change in Bihar has affected the politics of Nepal and vice versa.

The independence of India was shortly followed by the dawn of democracy in Nepal. The early independence era in Bihar saw an unchallenged Indian National Congress (INC) winning 6 consecutive elections since 1952 till 1972. This period in Nepal saw the reign of three kings, eight nominated Prime Ministers and one democratically elected Prime Minister. At a time, our neighbour sailed the stable seas to institutionalise and deepen democracy, our nation set out on a journey of wilderness and uncertainty. At a time where our neighbouring state was able to abolish Zamindaari system, revolutionise agriculture through Green Revolution and industrialise the infertile plains, our nation was occupied with inter-familial and intrafamilial clashes. To elaborate, the first few years of democracy saw a clash between the two Koirala brothers, on issues of monarchy, democratic institutions and of course, power. The brothers who were expected to work like Sri Krishna Sinha and his Deputy Anugraha Narayan Singh were seen fighting for the top post like Pandit Nehru and Mohammad Ali Jinnah. The fighting did not end at just the Koirala Niwas, in Narayanhiti Palace saw animosity between the ailing king and the young prince, the most alarming one being the issues of King Mahendra’’s second marriage. The intrafamily feud was the one between B.P Koirala and King Mahendra, the reason for which is very similar to Coulomb’s law (as the Greeks put it “likes repel and opposites attract”).[1]The two statesmen had similar traits which made it difficult for them to collaborate and cooperate. These series of clashes, diverse ideologies and a lack of a prudent system to mediate these clashes led Nepal to miss out on its formative years in modern history.

Nepal’s tryst with democracy was short-lived as in essence, the only democratically elected government lasted for merely eighteen months. One cannot help but notice that the oust of B.P Koirala in December 1960 was at a time when Bihar CM Sri Krishna Sinha was critically ill. Although the coup d'état was supposedly supported by the Indian establishment at the centre, it is highly unlikely that a similar decision would have been taken if Sri Krishna Sinha was active, as he had always been a propounder of a democratic Nepal and had affectionate and cordial relations with B.P Koirala.

Another important event in modern history was the student protest of 1979, during this time Bihar had its first non-congress and Dalit CM Karpoori Thakur. Unlike most of the other states ruled by the INC, the government in Bihar had been very sympathetic regarding the pro-democratic protests in Nepal. Thus, when the student protests broke out on the 6th of April the government across the border was sympathetic and supportive and provided a refuge for the political outlaws. The small student protests spread like a wildfire in Nepal affecting 35-40 of the 75 districts of Nepal.[2]As the protest strengthened the CM of Bihar was changed due to the manipulations by the upper-caste lobby of Bihar. The primary reason for the same is that CM Thakur was going to implement backward castes reservation as per the recommendation of the Mungeri Lal Commission.[3] The same upper-caste lobby was against the very idea of challenging monarchy in Nepal as they identified monarchy as a unifying and stabilising force of the nation. Moreover, as they belonged to the upper two varnas they had their dogmatic and superstitious beliefs which favoured the reign of the monarchy. But, despite the change in leadership in Bihar the protests in Nepal had already led the monarch to announce a referendum in a year. Ram Sundar Das’s reign in Bihar was short-lived and in February 1980 he was ousted and Bihar went under Governor’s rule, this was when Indira Gandhi was the PM. During this period, while, leaders in India were sympathetic to the democratic cause in Nepal, the establishment was not, unlike the early years where the pro-democracy activists received patronage and support from the Indian establishment, this time it was the monarchy receiving these assistances.

The changing global political scenario had its impact on both Nepal and India. In 1990, Bihar saw the rise of Janta Dal and its leader Lalu Yadav, at this time V.P Singh was the Pm of India, both these factors were favourable for the Nepalese democratic struggle. Janta Dal had always been in favour of a democratically governed Nepal. The leaders of Janta Party particularly in Bihar grew up under the tutelage of Lok Nayak Jay Prakash Narayan and had cultural and social ties with the people of Nepal. This was well represented in the support of the Bihari diaspora in Janandolan I. Political organisations were allowed to work from across the border in Bihar, parties received assistances which were both tangible and intangible and there was empathy in the hearts of the people across the border they had just been victorious in a war against tyranny.[4] With the foundation of democracy in the political governance in Nepal, Bihar saw the rise of a Subaltern Saheb.[5] As Nepal saw a move from absolute monarchy to multiparty democracy with a constitutional monarchy, Bihar was witnessing the rise of a despot unfortunately elected through democratic means. Nepal’s entanglement with democracy was again attacked by the rise of the Maoists, who believed that this system of governance did not provide for the means to transform the nation. With the growth of violence in both Nepal and Bihar, where one was against the state and the other was by the state, it was only the people who suffered. Poverty, illiteracy, malnutrition, unemployment and natural calamities crippled both Nepal and Bihar. During this period there was a tragic moment which changed the fate of Nepal forever, this was the royal massacre. The delivery of justice in the massacre was so feeble that it eroded the confidence of the people on the rulers. Moreover, the conjecture and speculations painted one of members of the royal family as the delinquent, the delinquent subsequently succeeded to the throne. In these tumultuous times when people had lost all hopes, the monarch tried to wrestle power was successful in overthrowing a legitimately elected Prime Minister. In Bihar, the Subaltern Saheb was involved in widespread corruption, promotion of nepotism through the rank and file of the party and state and establishment of caste hegemony.[6]The end of both the despot was near and in 2005 Lalu Yadav was wrested out of power in Bihar by his friend turned foe Nitish Kumar. In Nepal, King Gyanendra was forced to pave way for a national consensus government formed by the Seven Party Alliance in 2006. The exodus of Yadavs in Bihar was a turning point for Madhesis in Nepal, as Nitish’s reign meant that the other backward castes in Bihar excluding the Yadavs were able to consolidate political power, in Nepal this lead to a rise in Madhesi consciousness and the idea of organization and consolidation was incepted in the minds of the people of Madhesh, which eventually lead to Madhesh uprisings in 2007.

During this time while Nepal was highly volatile, Bihar had embarked on its journey towards prosperity through development. The government of Nitish Kumar had consolidated rule of law, built critical infrastructure, begun to deliver services, increased revenues and expenditures, improved bureaucratic functionality, and generated an important sense of citizenship among many of the state’s communities.[7]

2015 was an important year for both Nepal and Bihar. While the Nepalese were ready to promulgate the most awaited Magna Carta, the people of Bihar faced the perplexity of elections. This election was different from any other given election as the alliance they had elected in 2005, the NDA which comprised of the BJP and JD(U) had broken down. Now a new alliance called the Mahagathbandhan (MGB) constituted by JD(U) and its arch-rival RJD with the INC was contesting against the bully of Indian politics, the BJP. The BJP to capitalize on the emotions of the Biharis imposed an unofficial blockage preventing the supply of essentials. This measure proved to be counterproductive to the BJP, which due to its political miscalculations and hegemonic practices was reduced to a distant third in the 2015 Bihar elections. It would be safe to assume that the blockade on Nepal was of inconvenience to the neighboring Indian region too. Moreover, Biharis could not accept their kith and kin beyond the border suffering through such hardships. The blockade was subsequently lifted and affairs gradually returned to the status quo.

The period after this witnessed a tear in the MGB, and Nitish Kumar retained his premiership by aligning with the BJP and earning the title PaltuChacha.[8]The years that followed crippled Bihar with unemployment, the decay of urban centres, perennial flooding and a rise in crimes. Further, the loyal nature which is intertwined with the DNA of the Biharis could not accept the betrayal by Nitish Kumar, even though it was against their Subaltern Saheb. Only the results of the election would tell us that has this animosity translated to votes in the elections. With the Bihar election results being announced on the 10th of November, one should contemplate on the effects it would have on Nepal, whether a regime change would result in a political alteration in Nepal or will the incumbency thrive and status quo would be maintained.

The author is a Political Consultant/Advisor and has worked with leaders of Bihar, Bengal and Delhi.

[4]Bringing down the Indira Gandhi government in 1977 and overthrowing the Congress from Bihar in March 1990.

[5]Title is taken from a book written by journalist Sankarshan Thakur.

Nepal Was And Will Always Be A Country That We Will Be Proud To Continue Our Cooperation By Hanan Goder-Goldberg 6 hours, 14 minutes ago

The Opening Of The Airport Is A Milestone In Nepal’s Aviation And Tourism Sectors By Arnaud Cauchois 3 days, 15 hours ago