The Idea Of Elections 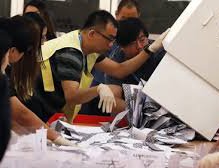 The old saying which says “familiarity breeds contempt”, if someone asks, that it should be proved, then no other time is suited better than the present to prove it. Wonders which our forefathers would have alluded as the fancies of an overheated imagination have in front of our eyes been achieved, with constant and regular effort by human innovation. It is ironic that what they would have gazed upon in awe generated out of disbelief or surprise, does not even succeed to ignite the simplest of our admirations. When Nepal was being ruled by an oligarchy, the very idea of freedom, liberty and periodic elections were unimaginable and people often had to pay a penalty for speaking about such fantasies. When Monarchy prevailed over the nation, political organisations, freedom of speech and expression and free fair elections were considered as a topic of conversation and jolly fun in the ‘tea-bars’, with a sense of mockery as if in the present time someone would have said that he would get some fire from the core of the sun to earth. And now when we have established universal adult franchise, liberty and rights for all citizens and recurring elections, people have become indifferent to the definition of ‘human accomplishment’. Freedom and liberty have even been imbibed by the cattle and animals which are seen exerting their rights in the main roads of Kathmandu, often controlling or disrupting the traffic. But the only system that could come close to the part of the brain that delivers admiration is ‘Ram Rajya’ the definition of which I can only assume is where every citizen is happy and is content with his life and all developmental activities occur sustainably and simultaneously.

The people of Nepal have always been fervent about the idea of elections. The first promised constituent assembly election was how the idea of choosing one’s leaders and supreme law was incepted into the Nepalese consciousness. Although the dream could never be accomplished it left Nepalese with a hope that elections could be a solution to the past 105 years of misery. While elections for the legislature was held in 1959, the short 18-month democracy could not quench the Nepalese thirst for freedom. Thereafter a system that mocked basic rights, liberties and universal adult franchise lasted in Nepal for 30 years and was monumental instilling a belief in the hearts of Nepalese that elections were the only means to achieve freedom and equality. There were two main reasons for this, firstly, the B.P Koirala 18-month government was able to ignite sparks of hope among the people by ensuring good governance and development. Secondly, the pleasant experiences of a democratic rule across the border spilt in Nepalese territory, the people of Nepal saw how India and China had started progressing in various avenues since the 1950s. As stated by John Stuart Mill, “Men as well as women, do not need political right in order that they may govern, but in order that they not be misgoverned.” This very idea had always been an unfulfilled desire of the people of Nepal. The 105 years of tyranny coupled with 30 years of authoritarian regime instilled a belief that elections were the only means of emancipation for the people of Nepal. It would not be incorrect to say that elections were regarded as a sacrament during this period.

The years that followed were successful in developing a system whereas Rousseau said “the general will is always right and tends to the public advantage”. But the successive governments in the system proved to be incapable of maintaining a balance of trade as well as balance of trust. The nation was burdened by trade deficits as well as trust deficit, i.e., the trust of the people in the system was eroding. The process of this erosion continued until there was a complete overhaul of the political system in 2005, to be soon replaced in 2006 for a demand to elect the constituent assembly for the nation. As the belief in the parliamentary system had been eroding over time a fresh and new mission was necessary to capture the political imagination of the people, which was the Constituent Assembly. But the first constituent assembly could not deliver a constitution. The people again voted for a new constituent assembly in 2013 and the assembly promulgated a constitution satisfying the majority at the same time alienating the minority. These years saw an unprecedented 19 Prime Ministers in 27 years. The situation of the Nepalese democratic system was exactly like what Plato had imagined- choosing leaders by elections is comparable to navigating a doomed ship:

“The sailors are quarrelling over the control of the helm; each thinks he ought to be steering the vessel, though he has never learnt navigation and cannot point to any teacher under whom he had served his apprenticeship; what is more, they assert that navigation is a thing that cannot be taught at all, and are ready to tear in pieces anyone who says it can”

Thus, after two decades of parliamentary democracy, the abolition of a 240-year-old monarchy and the death of 14000 people, election have transformed from a sacrament to an event, which was eagerly awaited but not revered.

The results of the 2018 elections were seen as an end to political instability, with the Communist alliance winning almost a supermajority. But the subsequent events till date proved that Plato still cannot be disregarded, the question had slightly changed from who would be at the helm of the ship to who would be the captain of the aircraft. But the ghost of the 1990s is still haunting us in 2021. The infighting in the Communist Party led to the dissolution of the parliament which was reinstated by the Supreme Court. But the preceding events of this political turmoil successfully captured the lack of interest of Nepali people to participate in an election. The public argument behind the same was the serious blow elections could have on the state coffers, but the underlying reason for this could be the absolute loss of faith in the electoral system, idea and philosophy of elections. The establishment faction of Nepalese polity which had been successful in projecting election as a ‘magical potion’ that can solve all the problems in the lives of the people of Nepal has failed. The idea of elections has further changed from an eagerly awaited event to an occurrence that could be either good or bad, but is necessary for the continuance of the present political system, i.e., a ‘necessary evil’. The alternative system of governance to the present system is a perennial debate that should be saved for the future.