J&K: Horticulture Continues To Be Torch-Bearer Of Kashmir’s Economy

J&K: Horticulture Continues To Be Torch-Bearer Of Kashmir’s Economy 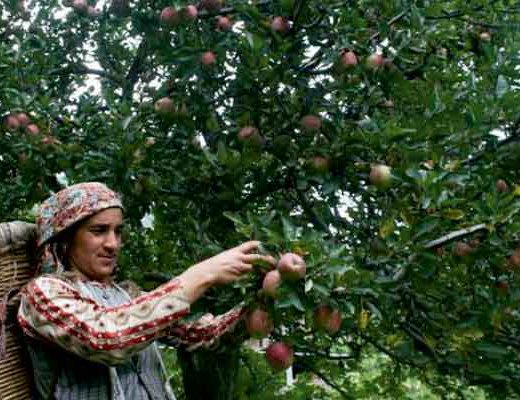 Despite the horticulture sector getting a meagre budgetary allocation, it continues to be the torch-bearer of Jammu and Kashmir’s economy by leading in employment generation and export.

As per official data of the Horticulture department, one hectare of an orchard generates almost 400 man-days per year and the wage employment generation per annum is around 8.73 crore man-days.

Also, around 7 lakh farming families (approx. 35 lakh people) are directly or indirectly dependent on Horticulture which contributes about 9 per cent to the Jammu and Kashmir’s Gross Domestic Product (GDP).

The horticultural sector not only sustains the Jammu and Kashmir’s economy but it has also carved a distinct place in the national fruit market. In India, 77 percent of all apples and 90 percent of all walnuts come from J&K.

The UT has been declared as the “Agri Export zone for Apples and Walnuts.” The other fruit crops grown in the UT are almonds, pears, cherries and apricots in temperate areas and mango, citrus, litchi, papaya, guava in subtropical areas.

Saffron cultivation in Jammu and Kashmir is already renowned. Globally, Iran ranks first in the production of saffron with its contribution to 70 percent of total production. India stands at the third position, and in the country the entire saffron crop comes from J&K.

Director Horticulture Kashmir, Aijaz Ahmad says that the horticulture sector has tremendous potential and the department is making efforts to provide the latest techniques to farmers in order to double their income.

Giving details about the department, he says that during last year, around 2 lakh quality plants have been produced and distributed among the farmers.

“One Hi-Tech walnut nursery has been established at Zawoora where 20,000 walnut grafted plants are being produced annually. The department has also one Advanced Centre at Zawoora Srinagar which serves as a demonstration centre besides providing training to the farmers as well as field staff,” Ahmad said.

He says that a back ended subsidy of Rs 11825.32 lakh has been released in favour of 16 Controlled Atmosphere (CA) Storage Projects.

13 Fresh CA storage projects have been sent to the Indian government for approval.

“Three lakh Apple clonal rootstocks have been imported. To increase the yield of apples from the present 10-12 MTs to 70 MTs per hectare, the Department has initiated a High-Density Plantation Programme. An area of about 193 hectares has already been brought under High Density plantation. The department is working out a plan to produce four crore root stocks for covering 10,000 hectares of land under high density plantation. We are planning to convert 100000-hectare area into high density plantation orchards,” he says. ANI

Russian Forces Claims Mariupol Steel Plant is Under Their Control By Agencies 1 day, 17 hours ago

COVID-19 Kills Over One Million In US By Agencies 4 days, 17 hours ago

Ukrainians Forces Continues Their Fighting Against Russians By Agencies 4 days, 17 hours ago